09.02.2018
The “blue room”, created during the period of Picasso’s work, called “blue”, does not have such a dramatic pathetic that is characteristic of other paintings by the master at that difficult time. And although there are no blind and beggars, the color of the canvas is striking by its cold and alienation. 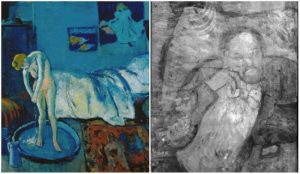 In a tight room, made in blue tones, in the very center takes a bath woman. She bent her head and it is impossible to accurately determine her age on the dry figure. Colored spots, in the form of vivid striped curtains, paintings on the wall, carpet, bouquet of flowers on the table – in no way revitalize the cold interior, but only enhance it, emphasizing the icy color.
In the 50 years of the last century, curious researchers drew attention to the nature, or rather, the illogicality of the directions of smears on the canvas, suggesting that Picasso thus sought to paint something. Not long ago, this guess was confirmed: before the blue room appeared, the canvas depicted a bearded man in a butterfly. The X-ray shot made it possible to put forward the hypothesis that it was none other than Mr. Wollar, a patron of the artists whom they joked about – no even the most charming woman was depicted more often than Ambrosia Wollar.

Today it is difficult to say why Picasso painted a portrait – he could have predicted that his best option was still ahead (remember the cubic portrait of Vollar), and maybe the blue room with a single girl in the center took all the thoughts of the wizard, forcing the rewrite of the canvas.