About this legendary personality, you can shoot a movie, it would have turned out not less enthusiastic and colorful than the ribbons about the legendary agent 007. 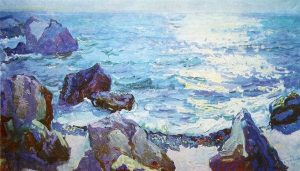 “A wonderful sportswear, all muscular. He is a champion in athletics and as a swimmer surprises even those who grew up by the sea. And in the evening, wearing a tuxedo, he turns into a secular man, who is turning into an international company in his hotel “, – wrote in Paris in 1936, the Paris newspaper” Nouvel Journale Literer “.

Meet Nikolai Petrovich Glushchenko, People’s Artist of the USSR, Laureate of the State Prize of the Ukrainian SSR named after Shevchenko, the glory and pride of the Ukrainian fine art, the Ukrainian Monet, and also the Soviet intelligence scout who operated under the pseudonym “Yarema”. 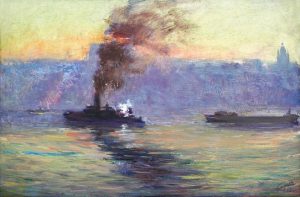 Kozatsky’s nephew spent his childhood on the unbridled thresholds of Zaporozhye, who was raised on legends and songs. After his father’s death, he and his mother moved to Yuzivka (Donetsk), where in 1918 he graduated from a commercial school and planned to join the Kharkiv High School of Technology, but the fate changed the grip of the war. Glushchenko, 18, was mobilized to the Denikin Army, which, in the territory of Poland, was interned to the Schelkovskii camp, from there Glushchenko escaped to Berlin. There he graduated from a private art school and academy.

In Berlin, Glushchenko met with the future writer and filmmaker Alexander Dovzhenko, at that time a Soviet diplomat who recruited a novice artist to Soviet intelligence.

In 1924 Glushchenko moved to Paris. There, on the street Volunteers, 23, with the support of Hetman UNR Pavlo Skoropadsky, he opened an art studio, where the leaders of Ukrainian emigre groups were looking at – one of the founders of the OUN Dmitry Andrievsky, Colonel of the Ukrainian Galician Army Vasyl Vyshyvany. 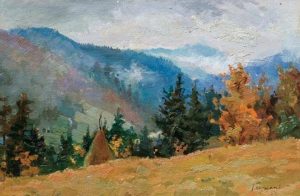 At the same time, Glushchenko friended writer Volodymyr Vynnychenko. It is believed that oversight of him was one of the tasks of the agent “Yarema”. Vynnychenko somehow asked Glushchenko to draw a cottage to him, and Glushchenko painted it … portraits of Ukrainian hetmans.

After coming to power Hitler, Glushchenko, on behalf of the Soviet leadership, focused on gathering information about the military-industrial complex of Germany. It is thanks to his connections that the Center in Moscow received secret drawings of 205 types of military equipment, including fighter engines.

The State Archive of the Security Service of Ukraine preserved a copy of the reporting agent “Yarema”, in which he stressed that despite the treaty on friendship concluded with the USSR, the German government is actively preparing for the war against the Soviet Union.

At the beginning of 1940, the Soviet intelligence commissioned Glushchenko to organize an exhibition of Soviet fine art in Berlin.

On the last day of the Berlin exhibition, it was attended by senior executives of the Third Reich led by Foreign Minister Joachim von Ribbentrop. Turning to Nikolai Glushchenko, he said that Hitler highly appreciates his talent. He considers him one of the best landscape painters in Europe and gives the album a lithograph of his best watercolors.

Subsequently, Glushchenko gave the album to Stalin, who expressed his desire to get acquainted with the work of the Führer. After the death of Glushchenko in 1977, it turned out that only one page from the album returned to him.

During his life, Nikolai Glushchenko wrote, according to various data, more than 10,000 paintings. Among them are the most landscapes. His works are kept in private collections and exhibited in museums in Ukraine, Russia, France, Germany, the USA, Canada, etc.