In 1978, Robert Motherwell hired a transport company to transport his paintings from one storage facility to another. Somewhere along the road, dozens of his works were missing. However, today one of them returned home. The Manhattan District Attorney conducted a repatriation ceremony in the center of New York City to announce the restoration of the anonymous abstract painting of the artist. 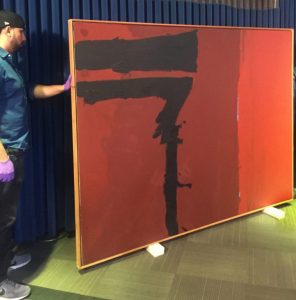 The work was among the works stolen 40 years ago. The canvas, created by Motherwell in 1967, will now be returned to the headquarters of the Dedalus Foundation, which was created in the same year when the artist died, to promote the heritage of the master. The work is probably worth millions, given the recent sales of comparable Motherwell works. The artist’s auction record of $ 12.7 million was installed on the Phillips in May this year. To date, more than 30 works of Motherwell sold at auction for more than $ 1 million. Red and black abstract painting was restored after the son of a transportation company employee brought her to the Dedalus Fund earlier this year to authenticate. Jack Flam, president and CEO of the Dedalus Foundation, quickly compared work with images and other records documenting stolen paintings. Then the FBI team on art crimes interfered. An unidentified person who is believed to have been unaware of the theft and was not charged with committing the offense voluntarily agreed to transfer it. Investigation of the remaining works of the painter continues, confirmed officials at a press conference. According to Bill Sweeney, Motherwell hired Santini in 1978 to store and transport paintings and other items to a new storage facility. Soon after, the artist said that dozens of his paintings were gone. “It is an honor for us to restore this extraordinary work of art in the Dedalus Foundation so that those who appreciate the fine arts will now know the true story of the past and future of the picture,” Sweeney said. “We can only hope that anyone who can know about the whereabouts of other pictures will bring information to the attention of law enforcement agencies so that those masterpieces were put on public display.”

Source: http://art-news.com.ua/naidena-kartyna-roberta-mazervella-pokhyshchennaia-40-let-nazad-19551.html
© Art News Ukraine. Under the guidance of Sotheby’s.