Pictures of Auguste Renoir’s “Girls on the Meadow” and Peter Paul Rubens “The Holy Family and Holidays Anna”, stolen from the gallery owner in Monza, which in the north of Italy last year found Italian carabineers and returned to the owner. Law enforcers accuse several individuals of involvement in the theft of a total worth of $ 30 million. According to the Italian newspaper Corriere della Sera, an unfortunate incident happened on April 20, 2017. The gallery, located in Monza, the suburbs of Milan, appeared as a man who introduced himself to the Israeli diplomat and rabbi Samuel Abram Levi Graham. He met with the owner of the gallery, who himself showed the best paintings from his collection. Rabin was delighted and stated that he intended to buy some of them. 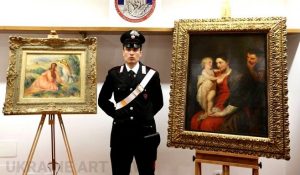 He chose Renoir’s “Girls on the Meadow” painting and the work of Rubens from the “Holy Family” cycle. The interested buyer offered to make an agreement at the Israeli Consulate in Milan. On the appointed day, the owner of the gallery with two guards brought the painting to the specified address. The linen lay in special boxes. Rabbi met them and spent in an apartment. There was another man, whom Graham presented as his assistant.

They checked the pictures, put them back in the box again and reported that they would pay by wire transfer. Then, under the pretext of having to urgently go to the bank, the scammers left the apartment, drove into a Peugeot car and drove away. After a while, the tired wait owner of the gallery suspected it was not good. He ordered the guards to open the boxes. There were no pictures in them. It turned out that the rabbi and his assistant replaced the boxes. Only after that the owner of the gallery opened his eyes. There was no Israeli consulate in the house where he had brought the picture, I had no birth. The apartment above the apartment is located in Albania. A “rabbi and Israeli diplomat” turned out to be the result of a 44-year-old croaking from Croatia named Nenad Yovanovich. It was he who was now arrested by the Italian police.