TAN figured out what was behind this: taking care of the master’s good name or self-interest 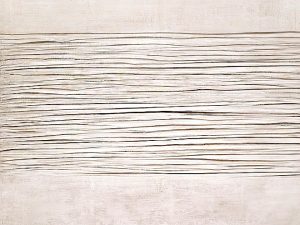 Piero Manzoni. Ahrom. 1958-1959.
The Piero Mandzoni Foundation announced that as early as December 2017, it destroyed 39 works, mostly paintings attributed to this artist. The act of destruction was preceded by long litigation: the work can only be recognized as a forgery and only the court can give permission for its destruction in Italy.

Piero Manzoni, who died in 1963 at the age of 29, is one of the most sought-after Italian artists in the postwar period. Among his works – a series of monochrome paintings – “achroms”, created by immersing the canvas in liquid kaolin. The prices on them reached auctions up to $ 15 million.

In the period from 2000 to 2002, opera singer Giuseppe Dzekkillo, who knew the artist personally, passed a number of works from his collection, including achroms, to the examination in the Archives of Piero Manzoni (now the Piero Manzoni Foundation). Dzekkillo asked the institution to confirm the authenticity of the works that belonged to him and to include them in the catalog-reason, which was prepared by the Italian curator Germano Celant. However, the archive declared fakes of 39 works from the collection and filed with the collector in court in order to obtain an official permission to destroy them.

First, the case was heard in a civil court. In 2006, the judge, based on the results of a graphical analysis of the artist’s signature, announced that the pictures were false, and ordered them to be destroyed. Against Dzekkillo immediately opened a criminal case, he was accused of having ordered the manufacture of fakes for sale. However, the arguments of the graphologist and the results of the stylistic examination seemed inconclusive to the criminal court. In 2009, the judge removed all the charges from the collector and decided that the paintings should be returned to the owner. There was a purely Italian legal conflict: the decisions of the two courts contradicted each other. But in Italy, civil and criminal justice systems work in parallel, and one ruling does not cancel the other.

In 2011, Giuseppe Dzekkillo died, and the controversial works were transferred to his son Graziano. Apparently, the fund managed to agree with him. (The fund declined to comment on this topic, and Graziano Dzekkillo wrote in an e-mail that he could not discuss this matter.) Jekkillo Jr. and the Piero Manzoni Foundation filed a joint motion with the Civil Court to enforce the 2006 decision. The request was granted, and the fund was able to destroy the disputed work.

However, with the owners of alleged fakes, this organization is often sued – it has already won 17 trials. During the hearings of the next criminal case, the lawyer of the accused Lionel Cherezi said that the fund’s employees may be personally interested in destroying the artist’s works – fake or not – to inflate the prices of his works from his own collections. In order to confirm his assumptions, the lawyer asked the director of the foundation Rosalie Pascualino di Marineo, who is now responsible for the examination, because Germano Celant no longer cooperates with the institution. DiMarineo replied that, since 2004, she herself is attributing herself with the brother and sister of the late artist, Helena and Giuseppe Manzoni di Kyoska, the president and vice president of the fund, respectively. According to Cherezi, now the attribution is done by people who are “directly interested” in its results, as they themselves own the works of Piero Manzoni. He is sure that the fund “declares a fake any work at its discretion, for the sake of its own purposes, rewriting entire episodes of the artist’s life.”

Asked how many of Piero Manzoni’s works are owned by the foundation, di Marineo replied: “The family does not own a lot of work, and it intends to sell them as little as possible.” In 2017, the organization began cooperation with one of the world’s largest art dealers – the international gallery Hauser & Wirth. However, according to DiMarineo, the purpose of the alliance is not the sale of works, but the “dissemination of information about the artist.” The intentions, of course, are good. The question remains: is it acceptable, when courts condemn works of art to death?