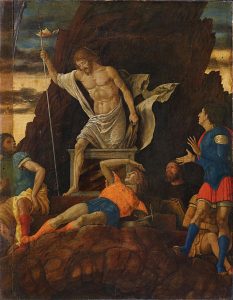 “The Resurrection of Christ” (circa 1492-1493) is again attributed to Andrea Mantegna.

The Academy of Carrara in Bergamo, Italy, discovered the “new” picture of Andrea Mantegna, who all this time was visible in her own collection. Curator Giovanni Valagusse restored the attribution of the “Resurrection of Christ” (tempera on the board, circa 1492-1493) to this master of the Renaissance in the new complete catalog of the museum Dipinti Italiani 1300-1500 (“Italian painting 1300-1500”), published by the publishing company Officina Libraria and including 110 paintings created in the XIV-XV centuries.

The artist’s name is written in capital letters on the back of the wooden board with a pen or a fine brush; apparently, the inscription was made at the same time, when the picture itself. In the catalog of the collection of Guillermo Lokys, a member of the board and later an honorary director of the Academy, compiled in 1846, it appears as the original work of Mantegna called “The Resurrection of the Lord; six figures; one of the most beautiful works of the famous master. ” In the same year, a document confirming that the work was restored during this period was dated. Lokis died in 1859 and bequeathed his villa and Bergamo art collection. “Resurrection” was among 240 paintings, transferred to the museum in 1866.

However, in subsequent years, various art critics disputed this attribution. Ironically, the first doubt about the “Resurrection” was expressed by the collector and great theorist Giovanni Morelli, who guided the transportation of works from the collection of Lokys to the Academy of Carrara. Morelli’s confidence that the painting was “spoiled by the interventions of restorers”, gave rise to art critics of the early 20th century to suggest that if the idea of composition belonged to Mantegna, the work itself was created either by his students or his son Francesco. In the 1930s, the American expert on the Italian Renaissance, Bernard Berenson, reduced the picture to the status of “a copy of the lost work”.

This view was fixed: after the Second World War, the picture was not a permanent exhibition and the catalog was listed as a copy. But Valagusse noticed a small gold cross at the bottom of the board – exactly the same as the shaft in the hand of Christ at the end – which indicated that the painting originally had the second, lower half. He managed to establish that this is the “Descent of Christ in Purgatory” (about 1492) – the signed work of Mantegna, sold in 2003 at the New York auction of Sotheby’s for more than $ 28 million. The assumption of Valagusse is confirmed also by the expert on the creativity of Mantegna Keith Christiansen, the curator Department of European Painting at the Metropolitan Museum in New York.

According to the Wall Street Journal, next year the Academy of Carrara wants to organize an exhibition in which the two halves of the work will unite again; Now the museum is negotiating with an anonymous private owner of the second half. In addition, the museum announced its intention to restore the Bergam part, tarnished due to the varnish applied in the XIX century.