Created by the famous representative of the Italian Baroque, the image of Lucretia since the XIX century was in a private collection and had never before been exhibited 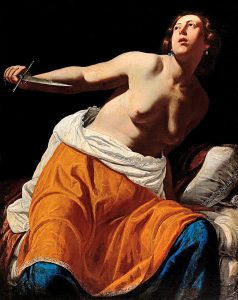 At auction Viennese auction house Dorotheum October 23 will be represented depicting Lucretia canvas Artemisia Gentileschi (1593-1654). The picture was never exhibited before and was not put up for auction.

Gentileschi – one of the very few known artists today, representatives of the Italian Baroque. Thanks to her pictures depicting strong women in dramatic life situations, she became a kind of female symbol of the world of old masters in the era of feminism and the campaign against sexual harassment of #MeToo. The contribution of artists who worked in various periods of art history is gradually overestimated; Against this background, there is a growing interest in the work of Gentileschi, in the center of which there are brave heroines of classical mythology.

In July, the British National Gallery purchased from the London dealer Robilant + Voena for £ 3.6 million “Self-portrait in the image of St. Catherine” (circa 1615-1617) Gentileschi. Another of her work, previously unknown, was sold in December last year at the Paris auction Drouot for a record € 2.3 million, which exceeded at times estimate in € 300-400 thousand Asked whether the National Gallery will fight for the canvas on auction of Dorotheum, the representative of the museum replied: “The National Gallery never comments on works in the acquisition of which it may be – or not be – is interested.”

The exhibition “Artemisia Gentileschi and Her Time”, which took place in the Museum of Rome in 2016-2017, also contributed to the growing interest in the artist’s work. Nicola Spinoza included the image of Lucretia as a catalog of this exhibition, published in 2015, and in the catalog of the Gentileschi exhibition in 2016 in the Roman palazzo Braski.

According to Mark McDonnell, head of the department of old masters at Dorotheum, “Lucrezia” is now in a private European collection, in which it appears to have come about in the middle of the 19th century. In that same period, a certain image of Lucretia was included in the collection of the Yatta family from Ruvo di Puglia: in documents from the family archive, a picture is mentioned with belle donne nude con pugnale (“beautiful naked women with daggers”). At the auction Dorotheum will also present a different image of Lucretia from the same collection – the brush of a Neapolitan artist of the 17th century Diana de Rosa.

“Lucretia” – the first canvas of Artemisia Gentileschi, with which the Vienna auction house works. Her works in principle are rarely at auction, and the database Artnet contains information about only 62 works of the artist, put up for auction – and every time with a low estimate. As McDonnell notes, the estimate of the picture (€ 500-700 thousand) is again “very modest and does not reflect its real market value, which, as we expect, will be much higher.”

“There were fierce disputes around the attribution of this canvas, but Nicola Spinoza and Riccardo Lattuada, who carried out the expertise in Vienna, are convinced that Gentileschi created it,” says McDonnell, who devoted six months to the work with the painting (with this attribution art critic Wolfgang Prochaska also agrees) ). Spinoza originally referred the work to the Florentine period of Gentileschi’s work (the late 1620s – early 1630s), but then changed his mind, suggesting that it was created in 1640-1645, that is, in the Neapolitan period. Lattuada also refers it to the Neapolitan period, but to its earlier part, approximately to 1630-1635, pointing to the stylistic similarity with the works of Massimo Stantsion, with whom the artist worked in the first time after moving to Naples, and Simon Vou, her friend on Rome.

“In life Artemisia was a scandalous figure – going to court with a lawsuit against the artist Agostino Tassi, who raped her, created her an ambiguous reputation. But she sought to use this reputation and forced her patrons to come face to face with these difficult, violent stories around suffering and powerful heroines, “says Mark McDonnell. According to him, in the XVIII and XIX centuries, her work turned out to be on the periphery of the canon: “In the views of the XIX century, the works of Gentileschi were too dramatic, too bloody, too rude for a” virtuous “artist. But their strength and power, in my opinion, are consonant with the modern atmosphere. “