The testimony of the repentant Mafiosi led to the trail of the picture of Caravaggio, long considered lost. 48 years after its theft an international investigation will be launched. We publish the material of the new French edition in the TAN network – The Art Newspaper Daily. 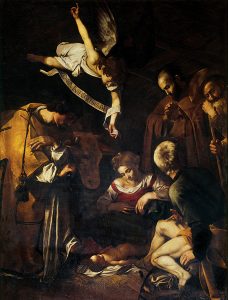 On the night of October 17 to October 18, 1969, Caravaggio’s painting “Christmas with Saint Lawrence and Saint Francis” (1600, 3×2 m) was stolen from the oratorio San Lorenzo in Palermo. Since then she has become one of the most sought after works of art in the world and the heroine of numerous studies, films and books. The Italian writer Leonardo Sasha dedicated her book One Simple Story (1989). British journalist Peter Watson, author of The Caravaggio Conspiracy (1984), claimed that he had already agreed to meet with a merchant to look at the canvas, but these plans were prevented by a devastating earthquake in southern Italy. Someone thought that this product of Caravaggio was eaten by rats in a shed, and someone – that it was cut into small pieces.

The last hope to find Caravaggio was already lost on November 5, 1996, when the mafioso Francesco Marino Mannoya, nicknamed Mozzarella, said that he personally participated in the theft of the painting, badly damaged it when he took it out of the frame in the church and then completely destroyed it. Mannoy in his youth was in the Sicilian criminal clan of Santa Maria di Gesu, and then, once in prison, he became one of the most useful pentito police informers. However, more recently, almost 50 years after the theft, Mannoya, still sitting behind bars, refused his words and said that he had invented everything.
Another repentant mafia goat nostra, also a member of the clan of Santa Maria di Gesu, a certain Gaetano Grado, who is now just over 70 years old, gave evidence to the Italian parliamentary commission on combating organized crime.
According to Grado, when on October 20, 1969, about the disappearance of the picture reported in the press, the goat nostra instructed him to deal with this matter. In less than a week, he found four robbers (previously all sources talked about two) – Sicilian thugs, who are now identified, and they have taken testimony. The painting was first delivered to Stefano Bontade, and then to Gaetano Badalamenti – to members of the so-called triumvirate of the Sicilian Mafia. In October 1969, the goat nostra proceeded to find a buyer and discuss the possible price; an intermediary and a buyer were found in Switzerland.

Grado described in detail the meeting with the Swiss buyer, whose face was identified in the photo – the identity of this man is established, but he died a long time ago. Thus, the canvas of Caravaggio was sold six months after the theft, it left Sicily and was forwarded to Switzerland through the usual channels that the mafia used.

The fact that the participants of the old events are now talking about the picture again – in many respects the merit of the commission on combating organized crime, which in the near future intends to publish a report on its activities. However, in a 700-page document, only 3-4 pages will be devoted to the masterpiece of Caravaggio and the above details will not be included there.

Over the past weeks, these news have been vigorously discussed in Rome, a city where, according to recently raised archives, Caravaggio wrote in 1600 the Palermo “Christmas with St. Lawrence and St. Francis”. The newspaper La Repubblica reported that the picture was taken abroad, but developed the old hypothesis that the canvas was cut into seven or eight pieces (seven figures and the bull’s head?). This assumption is not new. According to many, it was more profitable for criminals to sell seven or eight little Caravaggio than one monumental canvas. Everything is possible, because Grado does not know how the fate of the work developed after the completion of negotiations on its sale in the spring of 1970. The recent confessions of a witness shed light only on the first six months of history, stretching for 48 years. In any case, an international investigation, which will begin in the near future, will be long and time consuming.