The legendary Mona Lisa may soon leave the Louvre and embark on a journey. Mona Lisa will start packing her bags. A masterpiece by Leonardo da Vinci could leave the Louvre for the first time in 44 years, said French Minister of Culture Françoise Nissen. Nissan said that she was “seriously considering” this step as part of a traveling exhibition of France’s most prestigious works. In the case of the approval of La Gioconda – the wife of Francesco del Giocondo, whose enigmatic smile won innumerable millions – for the first time in 44 years “will come out” of the Louvre. Note that the last time she toured the museums in 1974. 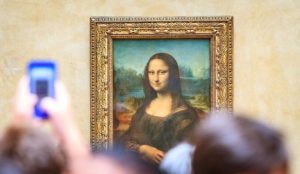 Officials and curators are not very happy about this news because of concerns about the fragility and safety of the picture. But Nissen dispelled these fears, referring to President Emmanuel Macron’s proposal to provide Bayeux tapestry XI century. Tapestry depicting the events of the Norman conquest, will go to the UK in 2022, when the Baye Museum will complete the reconstruction. In turn, the artist-critic Nikolaus Bernau considers the idea of ​​sending the world-famous painting by Leornardo da Vinci to the tour exhibition absolutely meaningless. Damage to objects during transportation is sometimes quite significant, warns Bernau. Especially often this happens with works of wood and other organic materials, such as canvas. Interesting! In 1963, Jacqueline Kennedy persuaded President de Gaulle to lend money to the National Gallery in Washington and the Metropolitan Museum. In 1911, the masterpiece was stolen from the Louvre, and it was found only two years later in Florence. And in 1956 a man poured a picture of acid when it was exhibited in a museum in the south of France.

Source: http://art-news.com.ua/mona-lyza-vpervye-za-polveka-poedet-v-muzeinyi-tur-18860.html
© Art News Ukraine. Under the guidance of Sotheby’s.