French artist Henri Matisse was called a “wild” artist because he dared to simplify the laws of painting. Looking at his canvases, the public indignantly criticized him, but at the same time, he constantly made an order for him. One of the most famous paintings by the artist “Dance” in 1910 is considered a provocative picture. Nude, dancing bodies on the canvas, wide smears – all of them were angry and, at the same time, attracted spectators. 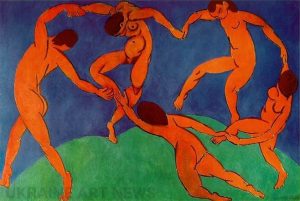 Once in 1908, a Russian industrialist and collector Sergei Shchukin looked at the workshop for Henri Matisse in Paris. He painted an order for several paintings to decorate the grand staircase of his new home in Moscow. The collector wanted the artist to write something that would symbolize music and dance. Matisse, thinking for a moment, agreed with joy, because in his mind for a long time the idea of some kind of allegory in dance has matured.

To create a famous painting the artist was inspired by the then famous organizer of the ballet in Paris Sergey Diaghilev and the Greek vase painting. On almost four meters of canvas, Matisse portrayed dancing in the dance of girls, simplifying their image almost to schematization. He was surprisingly able to convey expression through a minimal amount of colors. Their master used only three, which symbolize the internal heat that unites the heavens and the earth and the bodies of dancers. The dance itself represents the expression of the insane twentieth century. 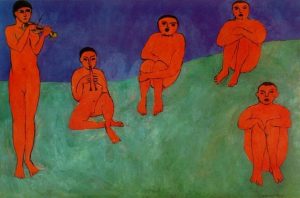 In addition to the famous “Dance”, the artist wrote for Shchukin two more paintings in the same style as “Music” and “Bathing, or Meditation”, the latter remained incomplete. Before sending two canvases to the customer to Tsarist Russia, they were exhibited for a general review at the Autumn Salon in Grand Palais, but Mati’s paintings received negative reviews and indignation from the public. The viewers are not accustomed to such innovation in painting, irritated by uncovered individual parts of the body, simple careless lines and only three dominant colors.

Collector Serhiy Shchukin was immediately blamed for not being ashamed, called him a garbage collector and almost insane. Frightened by such psychological pressure, he refused to take pictures of Matisse. But after a few days, being a halfway from Paris to Moscow, Shchukin changed his decision, despite the bad reviews, he wrote a telegram to the artist that he still sent him these pictures. He requested Matisse to apologize for his weakness and cowardice and insisted that the author cover these places that led to criticism.

After the October Revolution and the Bolsheviks came to power, Sergey Shchukin was in a hurry to leave the imperial empire, and the collection had to be left. All of the paintings were nationalized and sent to the Hermitage.

Throughout the time of collecting, Shchukin managed to create a unique collection of French avant-garde paintings, featuring canons of Gauguin, Monet, Matisse, Picasso and other well-known representatives of Western art. According to Sotheby’s auction house, the value of the 2012 Sergey Shchukin collection was $ 8.5 billion.