Curator of the main project of the 58th Venice Biennale of Contemporary Art, Ralph Rugoff, announced the theme of the exhibition – “May you live in interesting times”, similar to the Russian “God forbid you live in an era of change”. The saying in the world is widely known as the ancient Chinese and is attributed to Confucius, but in fact, there are no sources that would confirm such an origin.

“This is a Chinese curse invented and, despite the fact that it is a figment of the imagination, it has had a real impact on public rhetoric and polemics,” explained Rugoff. – At a time when the dissemination of false news and “alternative facts” undermines the political discourse and trust, on which it depends, it is worth stopping and revising our understanding of what is happening. Art can make us think about how we define our cultural boundaries. ” The Biennale, according to Ralph Rugoff, will strive to emphasize the idea that the meaning of works of art is not built exclusively into objects, but is concluded in discussions – first between the artist and works of art, and then between them and the audience, and finally between different communities. 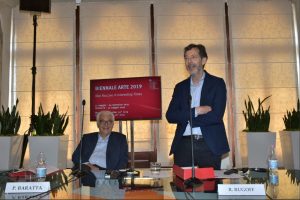 The next Venice Biennale of Contemporary Art will be held from May 11 to November 24, 2019.