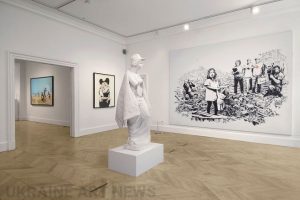 On the first day of the Banks exhibition titled “The Biggest Hits 2002-2008”, which opened in the prestigious London Lazinc Gallery, only VIP guests were allowed, and within hours after the opening they bought three paintings, one of which cost the artist an admirer at £ 1.5 The sum has become a new record for Banksy’s picture. Before that, his most expensive canvas was considered “spotty” canvas of Damien Hirst, which painted a street artist. In 2008, this work went from Sotheby’s bid to New York for £ 970,000. It’s also worth noting that not all of the Benxi products presented in the Lazinc gallery are sold. The exhibition was organized by the owner of the art space, Steve Lazarides, who in the past was the manager of the artist and helped him become famous, but now it is not connected with him.

Despite the rupture of relations, Lazarus still can pretty expensive sell Banksy’s paintings. At his show are several series of 25 paintings, such as Girl and Balloon and Flower Thrower. Pictures from the first series were once exhibited at £ 250. But in March, one of them at Bonhams auction was worth £ 344,750, surpassing all the previous expectations.