The Isabella Museum Stewart Gardner of Boston offers an award of $ 10 million for any information that will help find unique masterpieces of art. Recall that the works disappeared from the museum after the notorious robbery in 1990. In March last year, the museum increased the award from $ 5 million to $ 10 million for two paintings by Rembrandt

, Vermeer cloth and 10 extraordinarily rare items. The proposal of $ 10 million was due to expire on January 1, but the council of the museum voted for its extension for an indefinite period.
Early in the morning of March 18, 1990, two thieves disguised themselves as policemen and tricked into the Gardner building in Boston. They tied the guards, carved the most recognizable paintings from walls and frames, and then disappeared. The lost art includes Vermeer’s “Concerto” and Rembrandt’s famous seascape “The Storm on the Sea of ​​Galilee”. 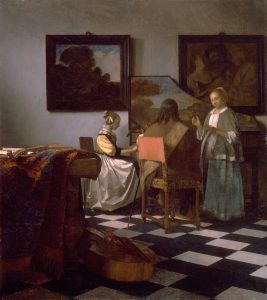 “We hope that someone who knows anything about the whereabouts of works will respond. The museum, in turn, guarantees the informer complete confidentiality. ” “Usually stolen masterpieces are soon after the theft or a generation later. We are optimistic that these works will eventually return home, “said museum security director Anthony Amor.
Interesting! In March 2018, the museum plans to release its first book on theft called “Stolen”. It will become a “picturesque essay” and a guide to 13 lost works of art.

Source: http://art-news.com.ua/muzei-zaplatyt-10-mln-za-ynformatsyiu-pro-mestonakhozhdenye-kartyn-18466.html
© Art News Ukraine. Under the guidance of Sotheby’s.