Six well-known masters from different countries gathered together to open the sky, in front of the audience, to create masterpieces from a stone: Vladislav Volosenco, Amancio Gonzalez, Peter Gronsky, Joe Clay, Volodymyr Kochmar, and Vasyl Tatarsky. Exactly a month they will work on the territory of the art residence of the 13th VDNG Pavilion, creating sculptures. All participants are connoisseurs of the work of Alexander Archipenko, an outstanding Ukrainian sculptor, founder of Cubism in world sculpture. It was in his honor that the symposium was named, the purpose of which is the development and popularization of plastic arts and the return of prominent Ukrainian names in the field of public consciousness.

“I have a dream – to create a park of sculptures, which would be admired more than one generation. The idea arose when I began to collect, in addition to the collection of paintings, which already exists, and a collection of sculptures. Therefore, the plan to hold the symposium is best suited to the planned plans. It is very interesting what will happen as a result “, – Andriy Adamovsky, founder of AdamovskiyFoundation. 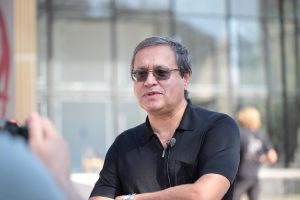 Andrew Adamovsky, founder of the Adamovskiy Foundation
This is the first pleinair in Kiev during the independence of Ukraine, which takes place in the same location as it was 30 years ago – the Expocenter of Ukraine VDNH. It is thanks to the All-Union Symposium that took place in 1998 in Kiev, the first park of modern sculpture, the preserved elements of which can be seen today on the Vladimir Hill.

“Conducting symposiums is an important component of the development of the cultural layer of society. This is especially the space for communication, the interaction of art with the viewer. Therefore, it is very important that the pleinair passes on the territory of the VDNG, rather than in a private, remote location. The dialogue will take place regardless of the reader’s willingness to understand art, because he will fall for the “scenes” of the creative process, where the forms have not yet become complete, have not become obstructed by interpretations and values, where everything is still in search, “- Darina Mo Mo, curator of the project.

One of the participants, Volodymyr Kochmar, a sculptor from Kharkiv, told about other advantages of the “symposium format”: “In a studio, it is usually not possible to do a great job. Creation of a sculpture is a very complicated process, very labor-intensive: it is necessary to bring a stone from a career, to hire cranes, other technical support … it’s not a brush to swing [laughs] in any way, without diminishing the significance of artists. Therefore, the symposium is a great opportunity for sculptors to create new large-scale works that they would not be able to do at their own expense in the workshop. ”

“For me, the symposium is an interesting format, because it is a deadline – a month of time, during which there is only me and a stone. This is important because in sculpture, in which different materials are combined, usually most of the time is spent on the technological part, and here I am one on one with a stone and for me, it is a certain buzz and relaxation, “- Peter Gronsky, a sculptor.

Joe Clay, a sculptor from Germany, spoke about his plans: “I want to convey strong and powerful forms. It is necessary to “free” them from the stone and show that they breathe and that they also have a life. I call it “energy in the form”. When I work in my studio, I’m usually alone. So work among the people – even better. ”

Interestingly, the fate of one of the participants in the symposium – Vladislav Volosenko – is somewhat like the fate of Archipenko, in whose honor the symposium is named. In the early 90’s he was still a student and he traveled to Canada in search of creative freedom, and it was there that he received recognition as a sculptor. “As far as I remember, Archipenko very much wanted to return to Ukraine, to make a big exhibition in recent years. But I was lucky more because we live in other times and, after traveling, I was able to return. I also work in the technique of “direct curving”: without a sketch, I simply take a stone and travel it as a person travels to the world “- Vladislav Volosenko, a sculptor.

Memoirs of student years and archipelago of the sculptor Vasyl Tatarsky: “During my training, Archipenko was considered a bourgeois artist and was banned from public access. For the first time, I became acquainted with the work of Archipenko thanks to the little book by Vitaly Korotych. It was a real discovery. The usual academic statements were tired, I wanted to innovate, and here it turns out our countryman has long worked in this direction. In those days, Archipenko became a source of inspiration and influenced a large cohort of artists. ”

That’s how the first sculptural pleinair of the sky, free from ideological plots of the Soviet era, revived, reassembled original artists inspired by the spirit of freedom, was made 30 years ago. A symbol of the symposium was the blue dancer Archipenko, who claims only one of his existence: the revolution in the art can happen at any time.