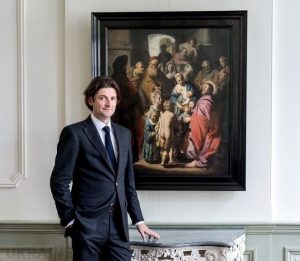 The Dutch art dealer, Jan Siks, who specializes in the works of the Old Masters, made a sensational statement that he was able to open the world to the previously unknown picture of Rembrandt van Rein. The work is called “Let the children and not let them come to me” before it was simply attributed to the Dutch school.

Jan Siks first saw a canvas on the Cologne auction of Lempertz in 2014. He managed to draw a picture for € 1.5 million at the start of € 15 thousand. A few years later, the examination confirmed that the painting actually wrote Rembrandt. It is believed that Rembrandt wrote a work in Leiden in the 1620s. Now the cost of the picture can grow at a time.

According to the art dealer, he was sure that he bought the work of the famous artist even before it was studied by art historians. Having examined the canvas in the online auction catalog in detail, he noticed that in the face of a young man in the background, the artist portrayed himself younger. At that time, the painter was not yet popular, so nobody, except himself, could draw such a painting. Siks also noted that Rembrandt often left his portrait on the canvas.