“With a probability of 99%” it is established that the scandalous canvas depicts ballerina Constance Kenyo from the Paris Opera. 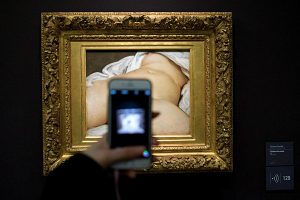 The visitor takes a picture of “The Origin of the World” by Gustave Courbet in the Museum of Orsay. Photo: Francois Mori / AP / File / TASS

To establish the identity of the model depicted in the scandalous picture of Gustave Courbet L’Origine du monde (“The Origin of the World”, 1866), is difficult for a very obvious reason – it depicts only the body of a woman.

Nevertheless, according to Agence France Presse, the French literary historian Claude Schopp is sure that the picture was posed by the former ballerina of the Paris Opera Constance Kenyo, who at the time of the creation of the work was 34 years old. Earlier it was believed that the canvas depicts Courbet’s mistress Joanna Hiffernan – not a very good version, as Heffernan was red-haired. But Keno contemporaries described as the owner of “beautiful black eyebrows”. In addition, she was the mistress of the Ottoman diplomat Khalil Sherif Pasha (Khalil Bey), who ordered Courbet this picture.

Exploring in Bibliothèque Nationale de France (BNF, National Library of France) the letter of Alexander Dumas-son addressed to Georges Sand, dated June 1871, Shopp paid attention to the proposal, which was previously deciphered as “You can not write with your most elegant and accurate brush interview (interview ) Mademoiselle Keno from the Opera. ” However, after studying the original text, Shopp found that instead of “interviewing” it actually says “what is inside” (intérieur). More details about the arguments of the scientist can be read in a book that is published in the Paris publishing house Phébus on October 4. 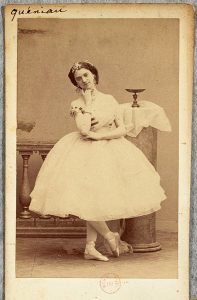 Constance Kenyo in the photo of André-Adolf-Eugene Disderi. Photo: BNF / Department of Photography and Printing Products

Head of Photography and Printing at BNF Sylvie Obenas told Agence France Presse that the interpretation of the correspondence “convinced me with a 99% chance that the picture of Courbet shows Constance Kenyo.” Another weighty argument, according to her, is the fact that the will of the ballerina mentions a picture of Courbet, which depicts camellias with a scarlet flower open in the center. According to Obenas, this work Keno received as a gift from Khalil Serif Pasha. Later, she became a respected philanthropist, and therefore, according to Obenas, her connection with the scandalous picture was eventually lost.