The French museum only recently discovered that half of its collection is a fake. More than half of the works in the collection of the French museum of the XIX century, dedicated to Etienne Terrus (1857-1922), were recognized as fakes. Everything turned out after the museum was visited by an art historian, who warned employees that the work seems suspicious. 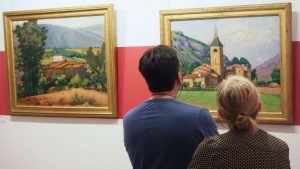 The Etienne Terrus Museum, located in the tiny hometown of the artist Elne, hired art historian Eric Forcade to re-select his collection after the recent restoration of the building. The historian discovered that 82 paintings, or about 60% of the works in their collection, were not written by Terres. According to Forkad, he almost immediately noticed that the work was fake. “In one picture, even the signature was erased,” he told reporters. An art historian informed the Minister of Culture of the region and convened a group of experts who confirmed his suspicions. “At the stylistic level, it’s pretty rough. Cotton stands do not correspond to the canvas that Terrus used to use. Also in the works there are some anachronisms, and it’s hard not to notice them. ” For two decades, the local council collected a collection of 140 paintings and watercolors for the museum. And such disappointing conclusions of the experts shocked local residents, including the mayor of Ives Barniola. “Etienne Terrus was a great artist Elne. He was part of the community, he was our artist, “Barniol told local media. “We are very upset by the fact that people visited the museum and saw a collection, most of which is a fake. This is a real catastrophe for the municipality. ” The mayor opened an investigation into counterfeits and insisted that the guilty be caught. It should be noted that the officials of the Etienne Terres Museum refused to comment on the situation and talk about their further actions.

Source: http://art-news.com.ua/yskusstvoved-posetyvshyi-frantsuzskyi-muzei-sdelal-shokyruiushchee-otkrytye-19194.html
© Art News Ukraine. Under the guidance of Sotheby’s.