More than half a billion for one collection: at the evening auctions in New York, new price records for the work of Claude Monet and Henri Matisse. All the proceeds will go to charity.

The collection of the Rockefellers is so great that it is sold in several receptions. The most valuable works were put up for the evening trades on May 8. As a result, a new auction record was set for a collection owned by one owner – about $ 646.1 million dollars (originally the auction house cautiously estimated the entire meeting as a whole at $ 500 million). The uniqueness of the auctions is also in the fact that all proceeds will go to charity – according to the will of David and Peggy Rockefeller, they will go to ten chosen spouses during life to non-profit organizations. The new owners found all the lots – 44 paintings, including works by Picasso, Monet and Matisse, and one sculpture – “The Monument to Claude Debussy” by Aristide Maillol. At the same time eight price records were set for different artists. “Among the buyers were not only private collectors, but also institutions,” – admitted Jessica Fertig, head of the evening auction of impressionism and modernism Christie’s. 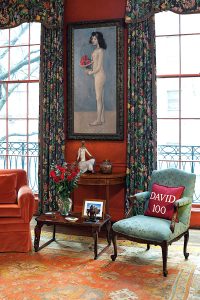 “A Girl with a Basket of Flowers” by Pablo Picasso in the library of the Rockefeller House on Manhattan’s 65th Street. The picture is sold for $ 115 million. Photo: Christie’s

Top-lot, as expected, was “The Girl with a Basket of Flowers” (1905) by Pablo Picasso. Portrait of a nude teenage girl, referring to the pink period of the artist’s work, once belonged to Gertrude Stein. Specialists Christie’s assumed that the work would go for 90-120 million, and they were not mistaken. The hammer of the auctioneer fell when the figure of $ 102 million was sounded – the final cost of work for the buyer together with the commission was $ 115 million. The picture was taken to the client who participated in the bidding by phone. Thus, it became the second most expensive work of Picasso, ever sold at auction (after the “Algerian Women” (1955), two years ago, went to the same Christie’s for $ 179 million). In 1968, David Rockefeller assembled a group of collectors to make a contribution to buy the legendary collection of Gertrude Stein and her friend Alice B. Toklas. The right to select for themselves those or other works from it collectors – deal participants distributed among themselves by lot, pulling out pieces of paper with numbers from the hat. Rockefeller was lucky – he got the opportunity to make the choice first. He, along with his wife, Peggy, among others, left behind him a “Girl with a Basket of Flowers” and hung it in the library of his house on Manhattan’s 65th Street. 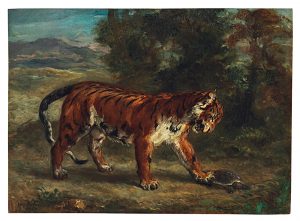 Eugene Delacroix. “A tiger playing with a turtle.” 1862. Photo: Christie’s

Another important item – “Water Lilies” (1914-1917) by Claude Monet – was sold after a long battle of buyers in the hall with a client from Asia, who was on the phone. He was so eager to take over the work, which twice raised the price of several million in one step of the bidding. The picture, with an estimate of $ 50 million, was sold for $ 84.7 million (including commission) – a record for the artist. The work, included in one of the most famous series of the artist, has an unusually large size for this cycle. “Because of its scale, there is a feeling that you are inside this landscape,” said Jessica Fertig and added that the demand for this type of work on the market is very high.

The third hit of the auction was the sensual “Sleeping Odalisque with Magnolias” by Henri Matisse – the canvas was written in Nice in 1923. The estimate was $ 70 million, the final price – $ 80.75 million (including the commission). The price was also a record for the artist. The picture went to another (and perhaps the same) Asian client who participated in the bidding on the phone.

It is very likely that Christie’s was able to secure a third-party guarantee for 13 lots, so the lots in the second half of the auction did not remain unsold, despite the small interest of buyers. Christie’s president Jussi Pylkkanen, personally conducting the auction, announced that it was “a great day for charity.”