The auction house Christie’s puts on sale “Portrait of the daughter of artist Clara Sérene” by the famous painter Peter Paul Rubens. Experts estimated the canvas at 3 – 5 million pounds sterling. By May 5, a portrait can be seen at a pre-sale exhibition in New York, then it will appear before the public in Hong Kong, and then – in the British capital. 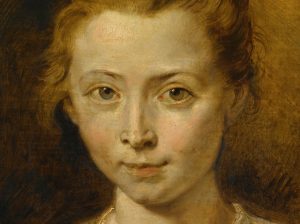 “Rubens’ image of family members is more free and courageous than portraits of wealthy clients. This image of Clara Serena, the only daughter of the artist and his first wife, Isabella Brent, was written shortly before the untimely death of a girl aged twelve and a half. This is the first major work of Rubens who appeared at Christie’s in London after a record sale in July 2016, “said Henry Pettifer, a representative at the auction house.

We remind you, two years ago, a picture of a biblical theme relating to the early period of the work of Rubens, was bought for 44 million 882.5 thousand pounds after the intense battle between the four bidders. “Portrait of Clari Sereny” – a very personal picture with a unique character, which occupies a special place in the work of Rubens. It was not intended for public appearances and, unlike other portraits, was written without preparatory sketches. Evening sales of the works of old masters will be held in London on July 5th.