It is not yet known whether the buyer who was willing to pay for her £ 1 million will take away the damaged “Girl with a ball”. 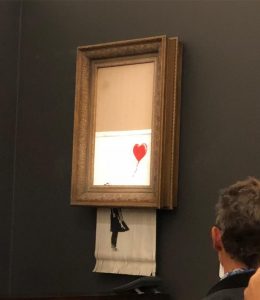 The self-destruction of “Girls with the ball” Banksy immediately after the sale at Sotheby’s. Photo: Sotheby’s

“The Girl with the Ball” is one of the favorite motifs of Banksy, but the large picture in the author’s frame exists in a single copy and was donated by the artist to the owner in 2006, immediately after the Barely Legal exhibition in Los Angeles. He put it at Sotheby’s with an estimate of £ 200–300 thousand, and the new owner was ready to pay several times more for it, but immediately after the hammer’s final blow, the unique canvas went through a paper-cutting machine hidden in a frame and ended up spoiled.

On this occasion, the auction house issued an official statement, in which he called the incident a new legend in the art world. True, so far it has not been reported whether the buyer is ready for its sake – and in fact, the work destroyed, to part with a million pounds.

Banksy himself is in the know – he posted on his Instagram page a frame from the auction room at the time of the secret mechanism, which was framed when it’s unknown when.