The exhibition at the d’Orsay Museum will show Edgar Degas ‘The Choristers’ painting, which was recently discovered near Paris when a bus parked at a gas station was searched. 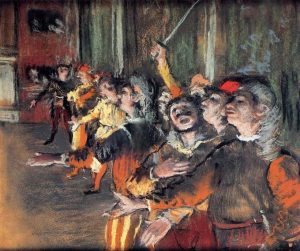 Prior to this, the fate of the canvas, written by Degas in 1877, remained unknown for nine years – since when in 2009 she was kidnapped from the Martini Museum of Cantini.
As Artnet writes, the picture was found in mid-February: the authorities conducted an ordinary inspection of the bus, not suspecting that there was a canvas in the luggage compartment. Who exactly transported the picture – is unknown, none of the passengers of the bus did not claim their rights to the cargo.
After discovering the canvas, he was sent for examination to the Parisian museum of d’Orsay, where specialists confirmed the authenticity of the picture. According to experts, the cost of Degas’s work is approximately $ 1 million.