In the Vienna Museum of Art History, they again installed the “Stairway to Klimt”, and in the closet of the former museum secretary found his picture considered lost. 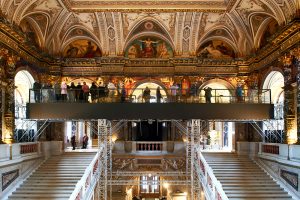 One of the most luxurious museum halls in the world at the Vienna Museum of Art History has become such, not least because of the picturesque decorations made by the “Company of Artists” group commissioned by Emperor Franz Joseph I. The allegorical cycle symbolizes different periods in art: Ancient Egypt, Antiquity, Renaissance. The paintings are inscribed by Gustav Klimt and his co-authors – brother Ernst and friend Franz Matsch – between the marble columns on either side of the main staircase and impress with their scale (their length is more than 12 m). At the usual time, the ceiling has to be viewed with its head back, but now a special bridge is installed under the dome of the museum. With him, the heroes of the founder of Austrian Art Nouveau can literally look into the eyes. 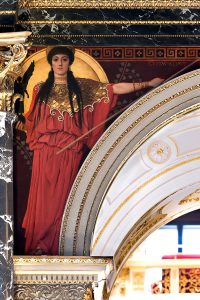 The attraction will last until September 2, so those who did not have time to do it five years ago, when the artist’s 150th birthday was celebrated, can now get on the 100th anniversary of his death: practical Austrians know a lot about successful ideas.

At the same time, in the ancient section of the museum, the famous Klimt canvas Nuda Veritas (“Naked Truth”) was first shown, which was acquired by the playwright and critic Hermann Bar and transferred to the Theater Museum in Vienna.

In addition, in Austria, found for many years, considered lost Klimt’s drawing “Two lying figures.” In 1951, as a long-term exhibitor, he was presented to the Museum of Modern Art “Lentos” in Linz by the collector Olga Yager. As a result, this work was at the center of the litigation between the authorities of Linz and the heirs of Jager, who in 2006 wanted to return Klimt and three works of Egon Schiele from the same array, but could not, they disappeared without a trace. The injured party was awarded a compensation of € 8.2 million, a small part of which (€ 100 thousand, according to Artnet) will now have to be returned: “Two lying figures” showed up in the former museum secretary’s cabinet thanks to a will in which she reported the whereabouts of the drawing from request to return it after her death. Now, before the return to the rightful owners, the drawing is planned to be presented at one of the exhibitions timed to the 100th anniversary of Klimt’s death, and with respect to the disappeared drawing, watercolors and the picture of Schiele, to resume the investigation.