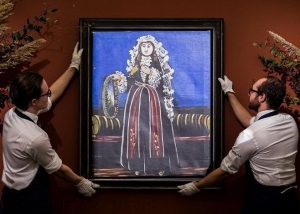 At the Sotheby’s auction in London, the picture of Georgian artist Niko Pirosmani, one of the brightest representatives of the naive art of Eastern Europe, set a price record by withdrawing from the trades to the new owner for 2.2 million euros ($ 2.84 million), exceeding the estimate in three times.

The painting is called “Georgian in the cure”, (Lechak – a detail of a Georgian female headgear: triangular white veil), was acquired in 1928 by an Austrian writer Stefan Zweig. The work decorated his house in Salzburg until emigration to Brazil in 1934. In 1981, the work was presented to the Reed Library in New York, where it was decorated with the Zwinger Hall until it was sent to the auction.

The previous record on the Pirosmani picture was set at the MacDougall’s auction in June 2010 – “Arsenal Mountain at Night” was sold for £ 1,775,369.