The BRAFA fair opened in Brussels for the 64th time. She manages to stay the same European and be relevant. 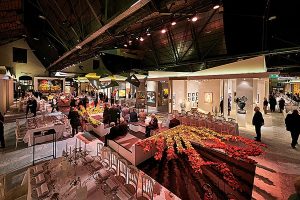 The BRAFA Art Fair presents this year 133 galleries from 16 countries. The fair is held for the 64th time. Being so old is a heavy burden. It is difficult to imagine how many crises, political changes, closures of antique galleries and the death of collector dynasties she experienced. Now it is a large and high-quality fair of mostly old art and antiques. BRAFA President Harold T’Kint de Rodenbeck calls the concept of the event a “verified combination of tradition and innovation” – and it still seems that BRAFA entered the five heavyweights of the old art market as if by accident, effortlessly. Here, no one is fighting for the participation of large jewelry brands, which, as they say, for example, in Paris, should attract additional buyers to the art fair, in particular from Asia.
Comparisons with Paris can not be avoided: La Biennale Paris (Paris Biennale, the former Biennale of Antiquaries), which now takes place annually in September, is the main competitor of the Belgian BRAFA. But the Brussels Fair found its own way, turning all possible disadvantages into advantages. It remained internal, European (as British blood galleries and buyers are waiting for as fresh blood) – now it promises a feeling of comfort and reasonable prices. Items of African art, the center of commerce of which has been located in Brussels for at least a century, are presented here as jewels and with reverence – but without the drama that surrounds them in France, the president of which has already promised to return all African art to its homeland. There is no noticeable pursuit of artistic fashion (when works from high-profile exhibitions are sent straight for sale). In Belgium now are the years of the old Flemish masters, the center of attention (like the last four centuries) are the artists of the Bruegel family, and at the fair, the works of masters from this dynasty cost more than a million euros. But not because the terms open exhibitions in honor of the great Flemish, but because these artists are considered a national treasure. As the work of the surrealists (“Balcony” by Paul Delvaux in the gallery Stern Pissarro is estimated at no less than € 3 million). Or comics – and not only Erzhe, the “father” of Tintin, but also the artists of the next generation. For example, Philip Gelyuk, whose character the Cat is no stranger to art. In the Huberty & Breyne gallery, a parked object of Banksy with a cut picture is sold: a picture with the Cat and the words “Is art becoming too commercial?” After pressing the button slides down, splits into ribbons, and then returns unscathed. The work is sold for € 60 thousand (together with remote control and a technical guarantee), there is a less expensive version – 40 copies of € 2.9 thousand each.
Among the most expensive items at the fair is Frida Kahlo’s plaster corset with a sickle, a hammer and an unborn baby (€ 2 million, Gallery Sofie Van de Velde); its owner, an American Belgian, is still going to show off, choosing a worthy successor.

Interestingly, the BRAFA galleries of different specializations are intermingled with each other, and not divided into blocks of “old masters”, “modernism”, “furniture and design” and so on, as for example at the Netherlands TEFAF. At the same time, most of the galleries and on their stand show a mixture of old and modern art (although there are, of course, exceptions). A lot of objects and sculptures: Diego Giacometti’s table with frogs costs € 490 thousand (Mathivet gallery), Damien Hirst’s small canvas, which only two colored circles climbed on, € 165 thousand (von Vertes gallery), ancient Egyptian scarabs and antique vessels from Phoenix – from € 10 thousand to € 25 thousand. Obviously popular is the direction of armchair rarities, allowing you to combine everything with everything and collect not large and not particularly expensive, but unique items.
An important component of the Belgian art market has always been African art. For example, the figures of the voodoo altar (Benin, the first half of the twentieth century, gallery Serge Schoffel) look really very scary, as are the masks designed for rituals. But offered and household items. Thus, a whole collection of wooden combs for hair, decorated with fine carvings, exhibited at Didier Claes (Didier Claes gallery), they are estimated at € 5-30 thousand. Red buying points appeared near some of them in the first minutes of the opening day for collectors.
The main decoration of this exhibition, which traditionally flows into dinner right among the fair stands, was a duet of British artists Gilbert and George, special guests of BRAFA. The alleys between the stands are decorated with huge works of artists from the fresh series “The Bearded Pictures”, while Gilbert and George themselves, famous for their performances, defiled around the fair, dressed in true English costumes. In the Bernier / Eliades gallery, the work of the famous couple can be bought – large photo collages of 2013 cost € 137,000.
The fair is open to the public from January 26 to February 3.