The picture painted by the British street artist Benxi on the door of the Bataclan concert hall in Paris was stolen, the BBC wrote. 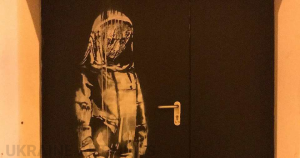 The theft took place on the night of Friday, January 25th. According to the investigation, the criminals became a “group of people in hoods with angle grinder” who escaped the truck.

The work depicts a young woman with a sad expression in her face. It is written as a memory of victims of a terrorist attack in the city. Then, in November 2015, 90 people were killed when armed militants attacked the hall during a rock concert.