Following the modern art museum, Mori Building together with teamLab launched a new museum with interactive installations created with the help of cutting-edge technologies. 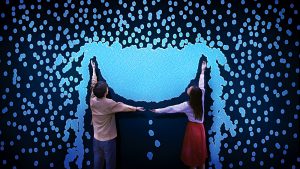 “Waterfall from the drops” shows how small drops can cause a lot of movement.

Even during the lifetime of the developer, billionaire and patron of art Minori Mori, on the upper floors of one of the buildings of his company in Tokyo, the Mori Art Museum opened with works of contemporary art, including Ai Weiwei and Bill Viola. Continuing this successful endeavor, the Mori Building team recently opened a museum with a unique interactive exposition where the visitor can travel through the unreal, imaginary worlds created with the help of the latest digital technologies.

Images freely flow in space and “enter into relationships and relationships with people, communicate with other works, influence one another and sometimes mix with each other.” Installations with romantic names “Born from the darkness of a beautiful loving world” or “The world can be comprehended without order – dancing people and animals without borders” are constantly developing projections that completely fill the space. Thanks to computers that generate images, they react in real time to the presence of a person and mutate.

In “Leaping Universe” visitors can jump on a trampoline among galaxies and planets. Photo: Digital Art Museum

A separate part of the museum is “Sport Forest”, it is devoted to physical activity. Here, digital technologies are combined with different attractions. Visitors can jump on a trampoline among galaxies and planets, move around suspended in the air planks between virtual birds or climb up, clutching at glowing gems.

After inspecting the museum, you can take your breath away from the impressions during tea drinking – and at the same time get new ones: digital flowers will blossom right in the cup, but exactly as long as there is a drink in it.