Auction house Christie’s auctioned the picture of the Ukrainian avant-garde artist Kazimir Malevich estimated at $ 9-13 million. The product, entitled Landscape, dated 1911, will be offered at the auction in the format “The Art of Impressionism and Modernism,” which Christie’s holds in London on June 20th. 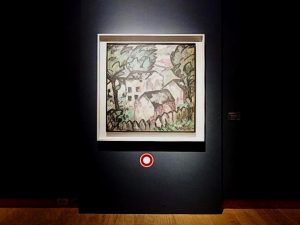 “The fact that this is one of the most extensive works of the early stage of the artist’s work emphasizes its significance as the crucial starting point for his future artistic career. It was thanks to Landscape and his other works that he first attracted the serious attention of the then critics” , – said in Christie’s.

This work was first exhibited at the Moscow Salon in February-March 1911. The following year, she was exhibited as part of an exhibition of the St. Petersburg Union of Youth, where Malevich represented a radical artistic association “Oslyachiy Tvist”. In 1927, an exhibition of the best works by the artist took place in Berlin, including the “Landscape” that remained in Berlin after the return of Malevich to the Soviet Union.

The work was discovered after the war and acquired by the Basel Art Museum, where it was more than 50 years before it was returned to the heirs of the artist. For auction, the picture is exhibited from a private collection.