David Killen paid $ 15,000 for 200 abandoned works, including a potentially sensational discovery. A New York art dealer who reluctantly bought the contents of the abandoned storage in New Jersey for $ 15,000, believes that he may have involuntarily acquired six previously unknown paintings of Willem de Kooning. 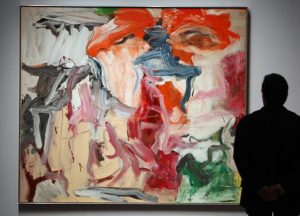 David Killen, who runs the gallery of the same name in Chelsea, decided to take a risk, acquiring unknown works on the art block after the local auction house refused them. According to Killen, the block contained unclaimed works from the studio of the late conservative arts Orrin Riley, who died in 1986, and his late partner Susannah Schnitzer. Riley worked in the security department at the Solomon Guggenheim Museum before starting his own practice. The heirs of Schnitzer’s property tried unsuccessfully for nine years to return the remaining work to their original owners. However, the Attorney General of New York declared this property abandoned and released works for sale. Killen says that the remaining 200 works were mostly “secondary creations of unknown artists”. He told reporters that he plans to use them as “fillers” for the two-month auctions that a man spends in his gallery. But this small adventure paid off when he came across what, he claims, is half a dozen unsigned de Koonings. The de Kooning Foundation does not provide authentication services, so an official decision will be difficult to find. But Killen invited the former assistant artist Laurence Castagno to express his opinion. Castagna told reporters that, in his opinion, the works are genuine and date back to the 1970s. “In my opinion, this is Willem de Kooning. There is no doubt about that, “he said. The verdict of Castagny was supported by “an important authority in de Kooning’s case,” who expressed his opinion on the condition of anonymity, says Killen. He says he contacted the de Kooning Foundation to inform them of his discovery, but no one answered his calls and emails. It remains to be seen whether the market will accept these works with skepticism or with enthusiasm. Marion Maneker notes that the artist’s small abstract works since the 1970s have recently been successful at the auction. “A small abstract work of the artist (1977) was sold at the auction of Phillips in May for $ 4.2 million, which is more than twice the initial estimate of $ 2 million,” he said. The dealer will present works at a party in his gallery on Tuesday evening and plans to sell them at upcoming auctions in the period from October to January 2019. According to the price base of online publications, de Kooning’s auction record is $ 66.3 million.

Source: http://art-news.com.ua/art-dyler-utverzhdaet-chto-nevolno-kupyl-6-kartyn-de-kunynha-19623.html
© Art News Ukraine. Under the guidance of Sotheby’s.