The 9-inch picture in the basement of Roger Landau was a long-lost Rembrandt. 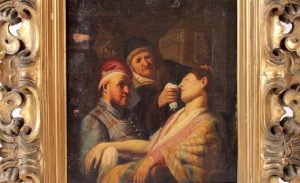 When three brothers from the American city of Teaneck turned to auctioneer John Nye to sell a collection of old family things, Nye thought that a silver tea set would bring more than a cracked and faded 9-inch picture.

“The lacquer has strongly desiccated,” said the auctioneer, who heads the Nye & Company Auctioneers in Bloomfield. “The picture is dark, and the monogram in the upper right corner is not visible.”
Ned, Roger and Stephen Landau inherited silver, porcelain and a picture when their mother died in 2010.

“She hung on the wall, but she never looked significant,” said Roger Landau.

A picture depicting two men trying to bring a woman to life. The painting was in a box in the basement of Roger Landau under a ping-pong table. 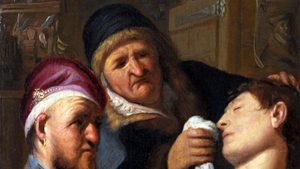 Only when the strange picture was sold, Nye and Landau found out what they had – the long-lost masterpiece of Rembrandt.

“Smell” was one of five paintings in the series, written by Rembrandt in his teens.

When the auction was announced, none of the applicants from Europe requested a status report. Also they did not ask for additional pictures of the picture. No one asked questions, Nye said.
Bidding began with $ 250 and soon passed Nye’s estimate of $ 800.
Then the caller from France offered $ 5,000.
From Germany, they offered 100 000 US dollars.

According to Nye, the winning bid of $ 1.1 million came with the French.
At this price, the German subscriber retreated.
And then he explained to Naya what was going on.
“You just sold Rembrandt,” said calling Nadia. “I was looking for this picture all my professional life.”
When the picture was cleared, Rembrandt’s monogram became visible, Nye said. The French auction participant sold the painting to Thomas and Daphne Kaplan, who own three others in the series. The fifth painting, depicting the taste, has not yet been found.

Nye said that the amount Kaplan paid for the painting was not disclosed. The published report says that they paid about $ 4 million.
The Landau brothers have no idea where the picture came from. And they never asked. “This is a mystery,” said Roger Landau. “My parents are dead, and we have no way of knowing.”