The unsuspecting owner brought a vase of the XVIII century in the auction house Sotheby’s in a shoebox. An unusually rare Chinese vase, which was found in the attic in France, will go under the hammer at the Sotheby’s Paris auction. Experts believe that it will be sold for $ 600 thousand – $ 1 million. 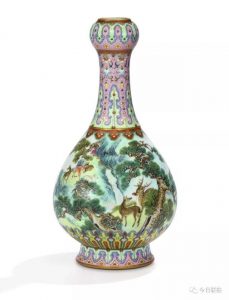 The unsuspecting owner brought the imperial vase “Yancay – Famille rose” of the XVIII century to Paris Sotheby’s in a small shoebox. It is worth noting that the experts of the auction house immediately recognized the high quality and sophistication of this work. The vase was in the family of the current owner for three generations and is believed to originally belonged to his uncle. According to experts Sotheby’s, the vase is the only known example of its kind. It was produced in China in the Jingdezhen oven for the emperor Qianlong (1735-1796). Famille rose or Yancai porcelain is almost never put up for sale, and most of the famous artifacts are in the collection of the National Palace Museum in Taipei or other public collections. The only comparable vase belongs to the Guimet Museum in Paris, although it differs slightly in the style of the painting. “Fine porcelain products, which have a direct connection with the great emperor Qianlong, are the most popular works of Chinese art. It’s amazing how such a work of art emerged from nowhere and is still in excellent condition, “said Henry Howard-Sneid, chairman of the Asian art department at Sotheby’s. According to Howard-Sneid, the reign of Emperor Qianlong is “the most glorious” time in modern Chinese history. The wealth of their empire would then be “envied by the whole world.” The Imperial Workshop produced only Yancai porcelain in extremely limited quantities and in most cases as the only items of its kind ordered (and in some cases also couples). The rare vase, which should be included in the auction block, depicts a landscape with deer and pine trees – symbols of health and longevity. Imperial stocks of the XVIII century list two pairs of vases with this design – one pair was made in 1765, and the other was ordered as a birthday present in 1769. Interesting! Another porcelain bowl Famille rose was recently sold at Hong Kong’s Sotheby’s for a staggering $ 30.4 million.

Source: http://art-news.com.ua/naidennaia-na-cherdake-kytaiskaia-vaza-uidet-s-molotka-za-1-mln-19290.html
© Art News Ukraine. Under the guidance of Sotheby’s.rtu