The new town of Valley XL with an area of 400 hectares and worth $ 2.8 billion will be dedicated to art. It will be located outside the city of Chengde, 97 km from the capital, and will include exhibition halls, a museum, an exhibition area for residences and offices. China plans to allocate 18 billion yuan ($ 2.8 billion) for the construction of a new city of almost 1,000 acres dedicated to art. The project is declared as an “eco-city”, which will include the Museum of Modern Art, the area of art education and artists’ studios, as well as commercial and residential areas. Construction should begin in the second half of 2018. 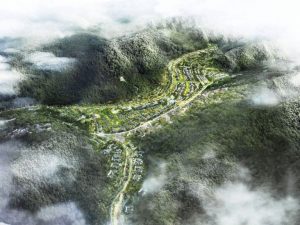 Valley XL is named after the location of the project in Xinglong County, Hebei Province. By the way, the city will be built by two little-known companies – Shenzhen XL Culture Development and Guangdong Yuegang Investment Development. “Thanks to the large expansion of the art industries, it is hoped that Valley XL will create a long-term, stable, ecological community and a high-quality living environment for permanent creative practitioners and tourists,” the project said in a press release. China is building thousands of so-called cultural cities across the country to stimulate tourism and the local economy. However, it is not clear whether enough quality content is enough to fill all new places and exhibition spaces. Most of the projects are carried out by private developers who can obtain sufficient loans to finance construction. Also, it is not yet known how the developers of Valley XL will finance such a large-scale project. It is said that they will work in partnership with national and international arts institutes. By the way, curator Li Zhenhua is hired as an adviser on the culture of the valley. Lee is the founder of the Beijing Art Laboratory and curator of the Art Basel Hong Kong section. Valley XL is located in a small valley 97 km northeast of Beijing. It is located near the Great Wall and is surrounded by mountains, forests and lakes.

Source: http://art-news.com.ua/kytai-postroyt-ohromnyi-horod-yskusstv-pod-pekynom-19306.html
© Art News Ukraine. Under the guidance of Sotheby’s.