For 2020, the year of the 500th anniversary of the death of Raphael, several exhibitions are planned, the largest of which will be held in Rome 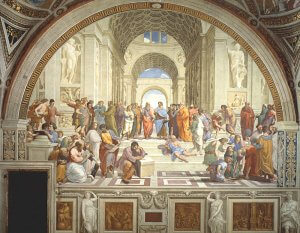 Raphael died in Rome, where he spent the last decade of life. During this period, he received the bulk of orders from the papal court, including the painting of the pontiff’s chambers in the Vatican – the famous Raphael stations. The master of portraiture and images of the Madonnas, Raphael, together with Leonardo and Michelangelo, are among the three titans of the High Renaissance.

Unlike both of his fellow competitors who survived to old age, Rafael died at the age of 37 years on April 6, 1520. The general public is familiar with his face from his early self-portraits, full of youthful energy. In the artist’s hometown, Urbino, the anniversary exhibition “Raphael and his friends from Urbino” will open in October this year. In the National Gallery of Marche, Raphael’s early work will be presented in the context of the works of other painters who worked at the brilliant court of the Duke of Urbinsky.

And as always, on the eve of anniversaries of famous artists, there is a struggle between world museums for the right to exhibit their landmark works.

Anyway, the most important exhibition of the anniversary year will be held in Rome in Scuderie del Quirinale – the former papal stables at the Quirinal Palace – the gallery run by the Italian Ministry of Culture (tentatively from March 5 to June 14, 2020). This exhibition space is entirely dependent on the rental of exhibits from third-party collections. The exhibition of Raphael is organized in conjunction with the Uffizi Gallery of Florence, where the main paintings will come from. It is not yet known exactly which works will leave Florence for Rome. The Uffizi collection contains such things as Raphael’s “Self-portrait” (1504–1506), started when the artist was barely 20, paired portraits of Agnolo Doni and his spouse Maddalena Strozzi (1504–1507), “Madonna and Goldfinch” (about 1506).

Another important venue of the anniversary year will be the Pinacoteca Ambrosiana Milan, which recently completed the restoration of large cardboard to the Vatican fresco “The School of Athens” (1509). The work was returned to the exhibition in March of this year.

As for other countries, it is expected that the master’s exhibition will be held next year by the London National Gallery, which houses 11 works by Raphael, but official announcements on this subject have not yet appeared. Another important London institution, the Victoria and Albert Museum, will focus on seven huge cartons to the trellis with scenes from the acts of the apostles Peter and Paul, which are in the permanent exhibition.

The Louvre does not plan to do a special exhibition dedicated to Raphael, but it is preparing an exhibition of works by the Italian Renaissance called “Body and Soul. Sculpture in Italy from Donatello to Michelangelo. 1460-1520, scheduled for spring 2020. Details will be announced later, but the museum expects to receive important exhibits from Italian collections.

Earlier this year, a diplomatic scandal broke out between France and Italy, when, contrary to the agreements reached, the Uffizi Gallery refused to confirm its consent to send a number of works of art to the Louvre at the exhibition about Leonardo. Apparently, the conflict was settled, and last month, Presidents Emmanuel Macron and Sergio Mattarella met in French Amboise, where Leonardo died in 1519 to honor the memorable date together. However, it is still unknown whether the legendary “Vitruvian Man” from the Venetian Academy Gallery will be brought to Paris and a self-portrait sketch from the Turin Royal Library.

Due to the problems that the Louvre and Leonardo have encountered, the negotiations on supporting the anniversary year of Raphael in Italy by the French side, without any doubt, are very complicated.