The painting, taken from the Manhattan home of an elderly couple, had been stashed in a Maryland attic 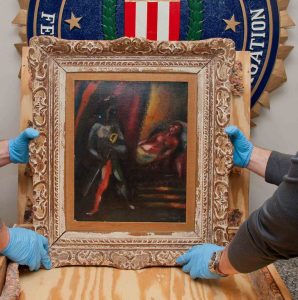 Ernest “Pick” Heller, a jeweller, and Rose “Red” Heller were cultural philanthropists and collectors who owned works by Hopper, Picasso, Renoir, and others. The theft occurred when the then octogenarians were away on their annual two-month trip to Aspen. According to an article at the time by UPI, the couple returned home to find jewellery, artwork, silverware, and carpets missing from their apartment, including the Chagall painting. The total value of the theft was said to be $600,000.

In today’s news release, the FBI claims the painting was stolen by someone who worked in the Hellers’ building. “It was an inside job,” said Special Agent Marc Hess, who works on the FBI’s Art Crime Team. Soon after the robbery, the thief met with an unidentified Maryland man in an attempt to sell the Chagall. The deal fell through, but the Maryland man kept the painting and tried to consign it to a Washington, DC gallery in 2011 and 2017. Concerned about the work’s provenance, the gallery owner suggested the man contact the FBI. He did, and when investigators arrived at his home last year, they found the painting stored in the attic in a homemade box “crafted out of a door jamb and plywood.” The box was labelled “Misc High School artwork.”

The Chagall is the only artwork from the 1988 Heller robbery that’s been found thus far. “The investigation into the other missing paintings continues,” Hess said in the release.