The first exhibition, entirely devoted to Jean-Jacques Leke and his fantasy architecture on paper, takes place in Paris Petit Palais 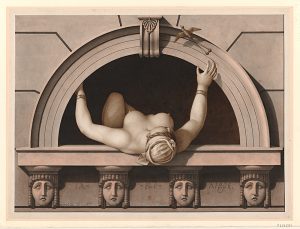 Little is known about Jean-Jacques Lekeu (1757–1826). Born in Rouen, in the family of the joiner. He worked with a local architect, studied drawing and was very good at it. He visited Rome and received two awards and then a scholarship of the local Academy of Arts, in 1778 he left to conquer Paris, where he was presented to everyone as “the architect of the Academy of Sciences, Literature and Arts of Rouen”. But in the capital, an ambitious provincial as a practicing architect did not materialize. And the little that he managed to build in the vicinity of his native Rouen, has not survived.

For life, Leke had to earn something as an employee in the cadastral chamber, then a construction officer, then a surveyor and cartographer. And all his free time he tirelessly painted, creating fantasy architecture that had become fashionable then on paper. He probably did it, hoping to achieve success here after the masters Claude Nicola Ledoux and Etienne Louis Bulle, the main trendsetters in this genre, who were also called “speaking architecture”, since the design of the project had to match its purpose. 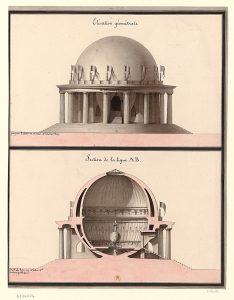 But here too Leko suffered a failure. Even for connoisseurs of the genre, his architectural fantasies, like a monument to Priapus, resembling a phallus, a farm in the form of a giant cow, mixing different styles and disregard of proportions, seemed extravagant and tasteless.

Lekeu died in poverty and obscurity, bequeathing before his death all his works to the Paris National Library. Only modernists remembered him in the first half of the 20th century. Especially he liked the surrealists and Marcel Duchamp, who was a big fan of Leke. The current exhibition is the first, entirely dedicated to Jean-Jacques Leke. Gathered several hundred drawings and engravings of the architect-visionary, she sets as her goal to completely rehabilitate him, even after almost two centuries after his death, putting him on the same line with Ledoux and Bulle.