For the first time in 60 years, masterpieces of French impressionists and post-impressionists, including works by Manet, van Gogh and Cezanne, returned from Great Britain to France

The Louis Vuitton Foundation presents a series of exhibitions that showcase the masterpieces of impressionists and post-impressionists created in France, which were deposited in foreign collections many decades ago. At the exhibition “Courtauld Collection. A look at impressionism is shown by about 100 paintings and graphic works from the collection of British textile industrialist Samuel Curto (1876–1947). Among them are the Bar at Folies Bergere by Edward Manet, Paul Cézanne’s Card Players and Vincent van Gogh’s Self-Portrait with a Bandaged Ear.

Courtauld, a descendant of the French Huguenots who settled in London in the 17th century, was ahead of his time, starting to collect works by artists such as van Gogh, Gauguin, Manet, Renoir and Cezanne. Already in the 1920s, Courtauld, who had grown rich in the production of viscose, could afford, as the director of the Gallery Courtauld Ernst Vegelin says, was the best and was a regular customer of Parisian dealers. 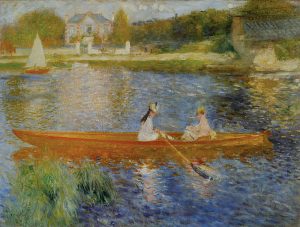 In addition, Courtauld established a special fund for the acquisition of the art of impressionism and post-impressionism in the UK state collections. The London National Gallery presented a number of such works to the exhibition at the Louis Vuitton Foundation, including a canvas “Wheatfield with Cypress” (1889) by van Gogh, which in its time was the first painting of the artist to be included in the collection of the British Museum.

In 1923, Courtauld founded the country’s first center for the study of the history of art – the Courtauld  Institute of Art and donated his collection and mansion to him in Portman Square, London. Since 1989, the Institute and the Courtauld Gallery have been located in the Somerset House mansion, which has now been put up for renovation worth £ 30 million.