According to their will, all the proceeds will go to charity.
People who can earn a billion dollars in the world, not that much, but not a little. People who are able to distribute this billion, much less. In the history of the Rockefeller dynasty there was a place for both extremes. Its founder, oil tycoon John Rockefeller, in the XIX century became the first billionaire of America. His grandson David Rockefeller, who died a year ago at the 102nd year of his life, donated $ 1.345 billion for his long life. But the broadest gesture was saved by the end. The posthumous sale of the collection of art collected by David and his wife Peggy, promises to be the largest ever charity auction.

At the auction put 1 thousand pieces of decorative art and 550 – fine. The total estimate of the collection is about $ 500 million (Christie’s expect that the results of the bidding will exceed the record of 2009 – the sale of the collection of Yves Saint Laurent and Pierre Berge, which brought $ 484 million). Estimate only one painting “A Girl with a Basket of Flowers” by Pablo Picasso – $ 90 -120 million All proceeds will go to the ten organizations chosen by the owner during life. Among them – founded by his father the University of Rockefeller and the New York Museum of Modern Art (MoMA), one of the founders of which was his mother. The collection will be sold for three days – on the evening and afternoon trades on May 8-10. To buy a knickknack or another from the Rockefeller House, buyers of moderate prosperity will also be able to: 650 lots with an estimate of $ 100 to $ 10 thousand are offered for online auctions from May 1 to 11, 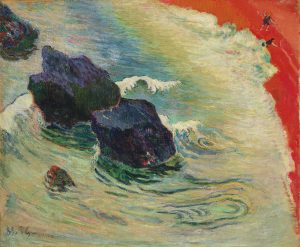 Pre-auction exhibition goes until May 8 in the halls of Christie’s in New York’s Rockefeller Center. You can not think of a more suitable place: this building, a masterpiece of American art deco, was built by David’s father John Rockefeller, Junior. It was he who became the first collector in the family – his weakness was Chinese porcelain and medieval tapestries. Enchanted, like many Americans, by the culture of the Old World, he donated money for the restoration of Versailles and the Reims cathedral and founded the museum of medieval sculpture and architecture of Cloisters (now part of the Metropolitan Museum) in New York. Modern art did not approve, radically diverging on this issue with his wife, Abby Aldrich Rockefeller. At first he tried to keep his wife strict, not allowing her everywhere to hang his beloved Matisse, Dali and Picasso and demanding to show them in a special gallery on the seventh floor of their nine-story palace house, where he himself tried not to look. But in the end, the family conflict went to New York and the world for good. Unable to fill the house with the works of fashionable artists, Abby together with two girlfriends-collectors founded the Museum of Modern Art. In the end, even the nine-story palace fell victim to her passion for beauty: she persuaded her husband to transfer the site where their family nest was located, for the construction of a new museum building. Now on this site the sculpture garden of MoMA, named after Abby. 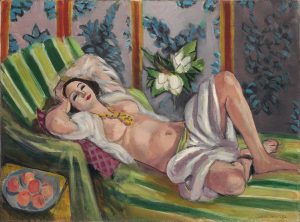 Henri Matisse. “Lying with the odalisque with magnolias.” 1923. Photo: Сhristie’s

According to the family legend, it all began with the fact that Barr and his wife in 1948 came with a secular visit to David and Peggy. In the living room hung portraits of the brush of rank-and-file masters of the 18th century, and Barra’s wife was indignant at the fact that the masters hang such mediocre paintings on the walls, although they could afford something more interesting. It was with the light hand of Barr in the collection of the Rockefellers that the top lots of the current auction appeared – the late “Water Lilies” (1914-1917) by Claude Monet, written under the influence of the Japanese engravings “The Wave” (1888) by Paul Gauguin and “Gabrielle at the Mirror” (1911-1913) ) Auguste Renoir (estimate the first canvas $ 50-70 million, the second – $ 12 million, the third – $ 7-10 million).

In 1968, when the heirs of Gertrude Stein put up for sale her collection, which included many of the masterpieces of Picasso, David and his brother Nelson and three millionaires in the warehouse bought it entirely. Some of the paintings they gave to MoMA, the rest divided among themselves by lot. David for his contribution of $ 2.1 million went to eight works by Picasso and two – Juan Gris. It is from this collection – the main hit of the auction “The Girl with a Basket of Flowers” (1905), referring to the “pink” period of the master. On the canvas depicts a naked teenage girl with a childishly serious look, fascinated not only by Picasso. Young Linda also posed Amedeo Modigliani and Kesu van Dongen and, according to Picasso’s biographers, traded at the entrance to the Moulin Rouge cabaret not only with flowers but with herself. Whether this work will beat the record of the “Algerian women” Picasso, who left two years ago at the auction of the same Christie’s for $ 160 million – perhaps the main intrigue of the upcoming auction.

Probably heated passion and around the sensual “Recumbent odalisque with magnolia” (1923) Henri Matisse (estimate $ 70-90 million). However, buyers from the Middle East, who recently made the weather at auction, rather will like the ensemble of three abstract wall panels Joan Miro. Three panels measuring 0.5 x 2.5 m once adorned one of the country houses of David and Peggy Rockefeller, their total estimated – $ 15-20 million.