The curator of Albertina suggested that Durer wrote Hands of a Praying Man to attract customers. It was always believed that the famous drawing was a preliminary sketch to the figure of the apostle in the altar Heller. 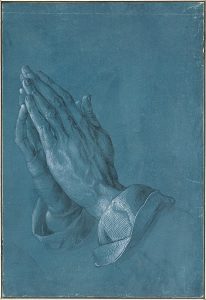 The famous “Praying Hands” by Albrecht Dürer is not at all a sketch for the central part of the altar of Heller, as it was considered to be for several centuries, but an independent work, a kind of advertisement of the master. This revolutionary hypothesis put forward by Christoph Metzger, the main curator of the Vienna Albertina, will be the subject of a major retrospective of the artist, which will open in the museum at the end of the year (Albrecht Dürer, September 20, 2019 – January 6, 2020).

Metzger argues that the drawing, made with a brush in a gray tone and whitewash on blue primed paper, depicts the hands of the artist himself. If this is true, then a number of interesting questions arise related to the structure and distinctive features of the hands and fingers of the greatest painter of the Northern Renaissance.

“Hands of the Praying One” is one of the most famous drawings in the world, belonging to Dürer’s most reproducible works. According to Metzger, the competition in popularity he can make only the “Vitruvian Man” Leonardo da Vinci. For more than five centuries, reproductions of the Hands of the Praying One, like icons, hang in the homes of millions of people; translated into sculpture, they are sold in church shops.

Since the XIX century, it was believed that this work was a study for the portrait of the apostle in the lower right corner of the central panel of the altar of Heller, completed in 1509. The name of the altar was named after his customer, the Frankfurt merchant. The original died in a fire in 1729, but thanks to the excellent copy made by Jobst Harrich, which is stored in the Städel Museum in Frankfurt, one can imagine how it looked.

Art historians have never doubted that the Hands of the Praying One is not an independent work, but a preparatory sketch for the altar. This opinion was not disputed at two major exhibitions by Durer in 2013: at the Shtedelev Art Institute and at the National Art Gallery in Washington, with Heinz Wiedauer, a colleague of Metzger, who also supervised Albertina wrote the preface to the exhibition catalog.

Metzger also believes that art critics are wrong. Why would Durer make an excellent design, only to then reduce it to the size of a tiny oil-painted altar? “The work is incredibly accurate, realistic, it’s too well done to be just a draft,” he says. “Dürer wrote this masterpiece to show the talent granted by God to his visitors to his workshop.”

According to Metzger, the Hands of the Praying One and several other related drawings were created “to advertise the genius of Dürer”. They were selected to convince potential customers of the highest level of skill, which distinguished the works of the artist. An indirect confirmation of the hypothesis can be well-known facts from the life of Dürer, who sought to emphasize his highly professional status. His signature is a recognizable monogram, similar to a trademark, it can be seen in many paintings and drawings. What was important in the fight against counterfeiters who forged his work.

The curator insists that (and in this he is not alone, many researchers have suggested this) that we have the hands of Dürer himself. “Graceful fingers and hands resemble those depicted in the 1500 artist’s self-portrait in Munich. The little finger of the distant, partly hidden from the viewer’s hand, seems to be slightly crooked, struck by arthritis – a characteristic detail that appears in the artist’s self-portraits, for example, it can be seen in the picture from 1493, which is stored in the New York Metropolitan Museum. ”

Dürer probably posed for himself, just slightly waving his hands, although it is possible (but less likely) that he wrote them in mirror image. If this is so, then it is impossible to say unequivocally on which hand the little finger was crooked – most likely, on the right. Since the sore finger is clearly distinguishable in the figure, made in 1493, when the artist was not more than 22 years old, it can be assumed that he probably suffered from this ailment from an early age.

In the absence of facts, we can only speculate, but if such a feature really distinguished one of the master’s fingers, this only adds to the honor of the greatest Northern Europe draftsman: he managed to work, despite the defect of his little finger. At first, Durer’s father wanted his son to follow in his footsteps, to become a jeweler, but this craft, as is known, requires developed fine motor skills, which the young man apparently did not have. But he could draw with a crooked finger.

Because of its fragility, the original Praying Hands rarely appears in public. The last time the work was published five years ago at an exhibition in Washington, and soon visitors to the forthcoming major exhibition of Dürer in Albertine will finally be able to see it.