Qi Baishi became the first Chinese artist to join the club $ 100 million. A collection of 12 unique works by the artist “Twelve Landscape Screens” (1925) went under the hammer for $ 140.8 million (931.5 million yuan) on Sunday at the Poly auction house in Pekin. This is the highest price for the work of Chinese art at auction.
Only 15 other artists, including Andy Warhol, Pablo Picasso and Vincent Van Gogh, were auctioned for more than $ 100 million (including inflation). 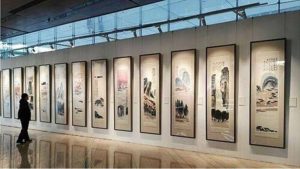 The name of the buyer representatives of Poly is not yet called. According to Leon Vender, an expert on Chinese art who was present at the sale, the auction was “insane” and was conducted by phone.

Qi Baishi created his works in 1925, when he was already 62 years old. The artist was born into a poor family in 1864 and worked as a carpenter before he began to travel to China at the age of 40. “Scrolls can be considered as the most expressive style in the stylistic transformations of Qi Baishi. In addition, they are the largest works of the master, “- wrote the auction house. The only other example of the set was created in 1932 for the military commander of Sichuan Province Wang Zunhu (currently in the Sanxia Museum in Chongqing). “I’m not surprised that the meeting was sold much more expensive than its estimeyta, because Baishi is the most influential of all Chinese artists in the XX century,” – said Leon Wender. He also added that the 12-band set has a “reinforced concrete provenance” and an “amazing state”.
Till Sunday, Baishi’s auction record was $ 28 million and was set in December 2016 at Poly International. However, in 2011 the triptych “Eagles on the Pine” (1946) was sold for $ 65 million, but the buyer did not pay for it.

Source: http://art-news.com.ua/khudozhnyk-tsy-baishy-pobyl-rekord-na-auktsyone-poly-18159.html
© Art News Ukraine. Under the guidance of Sotheby’s.