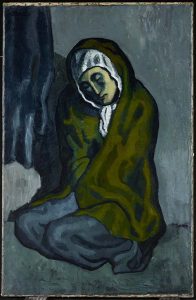 New technologies helped to discover under the picture of Pablo Picasso “The beggar sitting on his haunches” a landscape turned upside down by 90 degrees, written by another artist.

About the fact that Picasso painted his picture on top of another, it became known back in 1992, but only now the scientists managed to find out what was depicted on it. Originally, an unknown artist from Barcelona painted mountains on canvas. Then Picasso wrote over them “Poverty”, and, according to scientists, he turned the canvas and used the original outlines of mountains as a contour of the woman’s back.

Scientists also managed to find that Picasso first depicted in the picture the hand of a beggar who holds bread, but then removed this element, completely hiding the woman’s hands under the garment.

In order to find out what is under the top layers of the dye, the researchers conducted X-ray fluorescence analysis. Such technology will allow to determine which chemical elements are in different parts of the picture, not only on the surface, but also in all layers of paint.