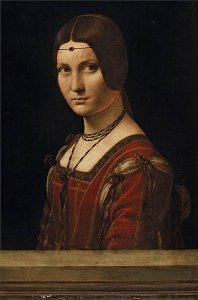 The exhibition of works by Leonardo da Vinci promises to be one of the largest cultural events of 2019, not only in France but throughout the world.

The management of the Louvre hopes that it will successfully be able to negotiate with other museums, as well as with private collectors, to provide da Vinci paintings and drawings.

What kind of paintings brought to Paris is still unknown. One can only guess. Of course, the exhibition will surely appear all five masterpieces of Leonardo from his own collection of the Louvre. Moreover, “John the Baptist” can be seen for the first time after a long restoration, and “Beautiful Ferroniere” will return to Paris after a lengthy tour in the United Arab Emirates. At the same time, it has already been announced that “Mona Lisa” at the time of the exhibition will remain at its usual place in the permanent exhibition of the Louvre.

Almost certainly at the Paris exhibition will show the “Savior of the World”, which last year was sold to a Saudi prince for a record 400 million dollars and became the most expensive work of art in history. There are quite a few chances that the Hermitage Madonna Litta, the Milan Portrait of a Musician and Saint Jerome from the Vatican Pinakothek will arrive in Paris. These paintings travel quite often, all of them were shown at the Leonardo exhibition in London.

It is possible that the famous Lady with an Ermine will arrive in Paris. The picture was also presented at the London exhibition. Since then, she managed to change the owner and moved from the private meeting of the Princes of Czartoryski to the ownership of the Polish state. Now the picture is temporarily on display at the National Museum in Krakow. This exhibition ends just in the fall of 2019.

At the London exhibition, the Louvre sent two Leonardo masterpieces from his collection at once – “The Beautiful Ferroneire” and “Madonna in the Rocks”. It is very likely that now the London version of “Madonnas in the Rocks” will return with a return visit to Paris, and both versions of the painting can again be seen together.

It is not yet clear whether The Buccleuch Madonna will arrive in Paris. The picture from Duke  Buccleuch’s private collection was present at the London exhibition, but she has never traveled abroad in the United Kingdom. In addition, there are doubts that this picture was written by Leonardo.

There is a great chance to see the so-called Vitruvian man at the Paris exhibition. The most famous drawing by Leonardo is kept in the collection of the Venetian Gallery of the Academy and is exhibited there every five years, every three months (more often and longer graphics can not be exhibited). However, the last time it was shown in 2013, and this year there was no regular exhibition in Venice. Perhaps precisely in order to show the drawing in Paris.

The Madonna with a Carnation in Munich, the earliest of the Madonnas of Leonardo, in recent years has never left the halls of the Old Pinakothek. However, now there is a large exhibition of Florentine painting of the Renaissance, which is richly represented paintings from the collection of the Louvre. It is possible that in gratitude, “Madonna with a Carnation” will leave for Paris next fall.

But the chances of seeing in Paris a portrait of Ginevra de Benci from the collection of the Washington National Gallery are almost none. The only work of Leonardo in American collections never came to Europe since it was sold overseas in 1967 from the private collection of the princes of Liechtenstein. If the Louvre manages to organize the first European tour of Ginevra de Benci, it will be a real sensation.

The Hermitage Benois Madonna will almost certainly not appear at the Paris exhibition. Over the past decade, the picture never left St. Petersburg. Perhaps the state of the masterpiece simply excludes its transportation.