The French authorities refused to issue an export license for the painting and gave the museum 30 months to find funds for its purchase. 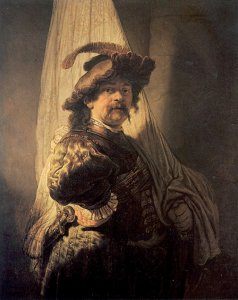 The Louvre plans to buy Rembrandt’s “Standard-Bearer” painting (1636), an elegant portrait of a life-size man who has been owned by the French branch of the Rothschilds for more than 180 years. Earlier, French Minister of Culture Frank Riester declared that the work was recognized as “national treasure”, and on April 19, the Journal official publication, which printed the main decrees and decrees of the French government, issued a decree refusing to issue an export license for the canvas rights to buy it.

Now the Louvre has 30 months to find the necessary funds to prevent the export of paintings outside of France. At the same time, the value of the work was not disclosed.

Three years earlier, the Louvre and the Rijksmuseum jointly bought portraits of Martin Solman’s and Opien Coppit (both 1634) by Rembrandt for € 160 million from Eric de Rothschild. The controversy was preceded by a sharp controversy due to the fact that the Louvre had originally recommended selling the works abroad due to the fact that he could not collect the necessary amount for the purchase. In the end, the funds provided by the Central Bank of France.

According to the book “The Corpus of Painting by Rembrandt” (1982–2014), “Standard-bearer” is “in very good preservation”. The painting is described as “written quickly, for the most part in broad strokes,” of shades of brown, gold and white. It was created in the same year as Danae, which is now located in the State Hermitage Museum in St. Petersburg. The basis of the costume of the soldier depicted on the “Standard-bearer” was partly the clothes of mercenaries of the early 16th century, who were called landsknechts. Perhaps Rembrandt was inspired by the engravings of artists such as Hendrik Goltzius who glorified the fighters for independence from Spain.