The former wife of the American investor Bill Gross has managed to cleverly deceive her former husband, replacing Pablo Picasso painting to copy itself created, and the original recently sold at Sotheby’s for $ 36.9 million. 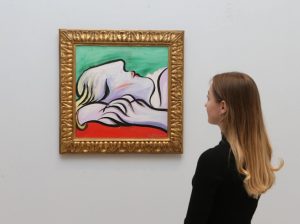 This is a picture of Picasso’s “Le Repos” (“Peace”), which depicts the mistress of the Spanish painter Marie-Teresa Walter. The New York Post found out how Sue Gross actually stole the man is a canvas by Picasso while demonstrating exceptional artistic talent.

“You took her, but did not leave an empty space on the wall, right?” – Asked lawyers Bill Gross. “No,” replied Sue, explaining that he made a replica of the picture and hung it on the wall. She did not inform her about what happened, because, according to her, at that moment they did not speak for 1.5 years and were in the process of divorce. Breaking a marriage is a matter of not one day, and in August 2017 the divorce process was still going on. It was then that the court ruled that Picasso’s “Le Repos”, owned by Gross since 2006, had to leave the ex-wife of a billionaire. Then Bill Gross began talks with his ex-wife about to give her the picture, which he thought at the time was at their home in California, sources told The New York Post. However, former Mrs. Gross said that this is not necessary – the original picture has long been with her.

Gross himself highly assessed the talents of his wife in painting. In a letter from 2015 for Janus Capital, where he is currently working, Gross admitted that his Sue was “an artist in their family.” “Sue loves to draw copies of some famous works using the projector to copy contours, and then just fill the gaps,” wrote Gross. “Why spend $ 20 million? I can draw it for $ 75, “Mrs. Gross once said. “A fabulous Picasso signed” Sue “hanging over the fireplace in our bedroom,” – recognized Bill Gross, referring to another picture of the Spanish artist.

Bill Gross in 1971 founded the investment company PIMCO and for a long time was its head. He retired in 2014 and joined Janus Capital, and in 2015 filed for PIMCO for illegitimate dismissal. The case was settled in March 2017 for $ 81 million, which went to the Sue Foundation and Bill Gross.