This is the first time that one of Benxi’s works came into the collection of the great London museum. This work was a Di-faced Tenner print depicting a fake ten-pound banknote, in which the princess Diana Welsh is portrayed instead of the queen. 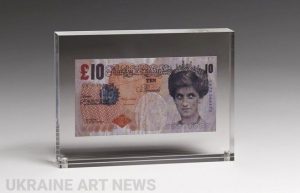 This work was created in 2004 for the action, during which thousands of such bills were scattered at the carnival in Notting Hill and the Reading Festival. In the movie “Out of Souvenir Store” (2010), Benxi said he had made these bills for a conditional £ 1 million and distributed some of them at the festival, but stopped the action after people began to try to pay them at the bar: “It looked like on the fact that we have forged one million pounds and, obviously, we can get into jail for 10 years, “the author said.

The work was transferred to the museum by an organization that is engaged in the authentication of the artist’s work – Pest Control.