The real triumph of polychrome sculpture fell on the turn of the XIX-XX centuries, with the advent of symbolism and art nouveau and their love for decorativism. 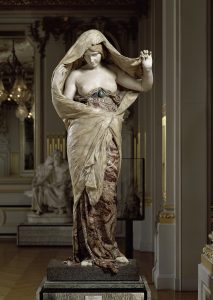 Polychrome sculpture recently became the theme of the exhibition at the Metropolitan Museum in New York, covering the period from the XIII to the XXI century. At the exhibition in Orsay, there are 50 samples of only French sculpture of the XIX century, but it turned out to be equally impressive. In France, within the walls of her neo-classical Academy of Arts, white marble and patinated bronze reigned supreme. This went on until the middle of the XIX century, while the pensioners of the French Academy in Rome did not discover an antique sculpture with traces of polychrome. Since the 1850s, color has already taken a prominent place in the arsenal of funds of French sculptors. However, they were not limited to a single coloring, as in 1832 Honore Daumier in his famous series of 36 portraits of caricatures of French parliamentarians. For example, the very popular sculptor of the time Charles Cordier (1827-1905) in his portraits, in addition to gilding, used onyx, effectively combining it with colored marble (“Negro from Sudan”, 1857), and not less famous Ernest Mesonier (1815-1891 ) sought in his sculptures of an amazing life-likeness on the verge of naturalism, using for modeling a pliable wax, cloth and skin, as in his “Horseman”, also included in the exposition. And the real triumph of polychrome sculpture took place at the turn of the 19th and 20th centuries, with the advent of symbolism and art nouveau with their love of decorativism. At the same time, new materials appeared in the arsenal of sculptors: enamel, colored glass, brass. Well, the exhibition is completed with painted bas-reliefs from Paul Gauguin’s tree on the Tahitian themes and Edgar Degas’s “Little Dancer” in a pack of real tulle and a pink ribbon in her hair.

Museum of Orsay
Polychrome sculpture in France. 1850-1910
Before 9 September
www.musee-orsay.fr