The National Gallery in London shows one of the fastest and brightest artists in the world. 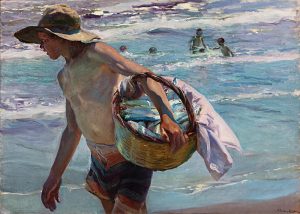 In the spring of 1908, one London gallery made an incredibly audacious statement about its new exhibition. Henri Matisse then finished writing “The Red Room”, Claude Monet immortalized water lilies in a pond in Giverny, and Pablo Picasso, at the peak of his African period, recently presented the Avignon Girls to the public. This did not embarrass Grafton Gallery, which stated that it was opening an exhibition of the “greatest living painter” – the Spaniard Joaquin Sorolla (1863–1923). It was the first and until recently the last exhibition of Sorolla in Britain. In March of this year, a retrospective “Sorolla. Spanish Master of Light ”, which then travels to Dublin, to the National Gallery of Ireland.

Joaquin Sorolla was so famous in his homeland in Valencia, where he was born in 1863 in a family of fabric merchants, that during his lifetime the city authorities named one of the streets in his honor. The talent of Sorolla first manifested itself when he was a teenager working as a retoucher for a photographer whose daughter named Clotilde later became the artist’s wife. He entered art college and soon began to win major awards and scholarships to study in Italy. In 1900, his paintings had already bought the Prado Museum, and at the World Exhibition in Paris, Sorolla was awarded a gold medal. It was then that the artist, having seen his dark canvases in the dim light of the exhibition hall, decided to paint paintings illuminated by the Spanish sun. 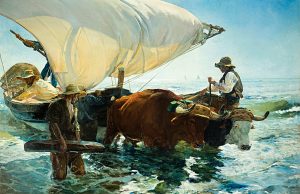 The magnificent mansion of Sorolla in Madrid, with marble floors and antiques, after the death of the artist from a stroke in 1920 became a museum, where his three children were transferred to more than a hundred of his father’s works. A third of this collection came to the current exhibition in the National Gallery: portraits of the family, huge beach scenes painted in the open air with grains of sand frozen in brushstrokes of paint. Other works provided the Prado and the New York Metropolitan Museum. And only one picture in the exhibition, a portrait of Princess Beatrice, the youngest daughter of Queen Victoria, is from the London National Portrait Gallery, the only work by Sorolla in Britain.

The great-granddaughter of the artist Blanca Pons-Sorolla, who is now working on his first complete catalog-reason, having already included more than 4 thousand works, consulted the exhibition in London. Indeed, Sorolla was an unsurpassed master of quick writing, beating in this and his main rival, the Italian Giovanni Boldini.