The stainless steel sculpture “Rabbit” was sold at Christie’s for $ 91 million, making Jeff Koons the status of the most expensive living artist 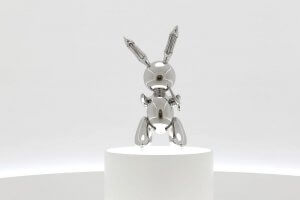 The evening auctions of Christie’s post-war and contemporary art in New York on May 15 brought the auction house $ 538.9 million, and Jeff Koons received the status of the most expensive living artist. His “Rabbit” in 1986 for $ 91 million acquired for his client art dealer Bob Mnuchin, the father of US Treasury Steven Mnuchin. The sparkling silver rabbit, made of stainless steel, was undoubtedly the main trophy of the evening. This work, as well as a dozen more pieces put up for auction and successfully sold, came from the collection of the late Cy Newhouse, the media mogul and the owner of the publishing house Condé Nast. It is known that Koons made four versions of such a sculpture, and this one was the last to remain in a private collection.

“No one understands the psychology of wealth better than Koons,” said Evan Bird, executive director of art for the US Trust bank. “Rabbit is at the same time flattering and challenging the collector, and can even raise the status of the owner much better than any PR agency.”

Another success of the evening auction at Christie’s was $ 88 million, earned by Robert Rauschenberg’s 1964 Buffalo II painting from the collection of Robert and Beatrice Mayer. Much of the work in silk screening was created shortly after the assassination of US President John F. Kennedy, which is depicted on it. Art consultant Grace Lee argues that the cost of works of Rauschenberg has not yet reached its maximum and its correction is inevitable. “The fact that prices for Rauschenberg are much lower than for Jasper Johns and Cy Twombly is contrary to common sense, because Rauschenberg’s influence on contemporary world art, especially in China or Latin America, was much greater,” she notes.

The final chord of the evening auction was a lively struggle that unfolded for the last lot – “The Garden” of Jonas Wood, the proceeds from the sale of which should go to the World Wildlife Conservation Organization (Global Wildlife Conservation, GWC). As a result, the final result repeatedly exceeded the estimate of $ 700 thousand and the work was sold for $ 4.9 million.