Opponents call for giving the Netherlands museums the right of first purchase, but the country’s prime minister says this is a private affair of the royal family 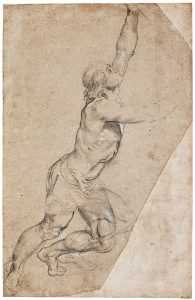 Peter Paul Rubens. A sketch of a naked young man with his arms raised. Photo: Sotheby’s

The sketch of Rubens with the image of a young man with his hands up is planned to be sold at Sotheby’s auction along with 12 more pictures of old masters, as well as porcelain, dishes and silver from the collection of the Dutch king Willem II (1792-1849). It is expected that on January 30 at the auction in New York, the draft will go under the hammer for $ 2.5–3.5 million.

A member of the Liberal Party of Democrats 66 (D66), Salim Belhay, called on Prime Minister Mark Rutte to appeal to the royal family to delay the auction, explaining that the work should first be offered to the Dutch museums. However, as Belhai told The Art Newspaper, Rutte replied that “this is a private affair of the royal family.”

Now the party D66 is going to appeal to the royal family directly. “Before exhibiting works for foreign auction, they could find out if the Dutch museums are not interested in buying them. Then the Dutch public could continue to enjoy these drawings. If the works leave the country, we will never see them again, ”says Belkhay.

The Dutch museums themselves, intending to copy the works of old masters from their collections, are obliged to make sure that other institutions of the country are not interested in the works, but this rule does not apply to private collectors, including the royal family.

Director of the Boymans Museum – van Beuningen Sharel Xx also called on the royal family to withdraw works from the auction and to give museums like him a chance to buy them out. The Rotterdam Museum, which is currently working on its expansion, has the largest collection of works by Peter Paul Rubens in the Netherlands.

“They did not consult anyone before making this decision. This behavior is not worthy of royal personalities, – said Ex Netherlands AD. “If the owner puts the work up for auction, then he is only interested in selling at the highest price possible … If we could get this drawing, it would be the most important work of Rubens in our collection.” Later, a representative of the Museum Boymans – van Beuningen said that the royal family did not respond to Aks’s request to withdraw works from the auction.

The Sotheby’s catalog states that King Willem II purchased a sketch of a young man from Sir Thomas Lawrence in the 1830s, “to put him on a par with masterpieces of Raphael, Michelangelo, Leonardo and Rembrandt.” Since then, the drawing remained in the royal collection. He is one of the few extant sketches made by Rubens for the depiction of the main characters of the altar painting “Exaltation of the Cross”, written for the St. Walburg church in Antwerp at the end of 1608, shortly after the artist returned from Italy. Now the canvas is in the Cathedral of Our Lady of Antwerp.