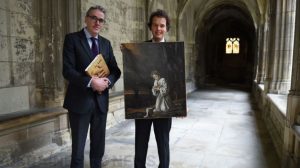 French auctioneers accidentally found a picture called “Jesus praying before the cross.” It is known that this canvas is a genuine work of French artists of the XVII century Antoine, Louis and Mathieu Lenen. 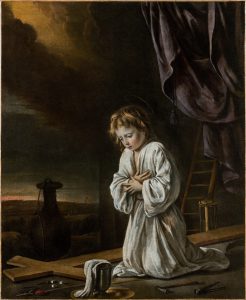 “A 72 x 54 cm oil painting depicts Jesus at the age of 6-8 on his knees and with his arms crossed over his heart, a blond blue-eyed boy with a delicate skin and angelic face, surrounded by a pitcher covered with a towel from which Pontius Pilate washed his hands, a ladder with which the body was removed from the cross, a hammer, nails and other objects associated with the Passion of Christ.The gloomy landscape and a heavy purple curtain add contrast to this unusual scene, “the experts shared.
They are also confident that this is an extremely important work of the Lenen brothers, probably created between 1642 and 1648, a few years after the birth of Louis XIV.