The British 81-year-old artist David Hockney, who writes rich landscapes and portraits, has every chance to become the most expensive artist in the world while still alive. This year, one of his most famous works is planned to be auctioned, which, according to auction experts, can be sold at a record price, among existing living artists. 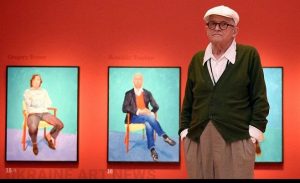 It is about David Hockney’s “Pool with Two Figures,” which he wrote in 1971. Now the canvas is in the collection of British billionaire Joe Lewis. 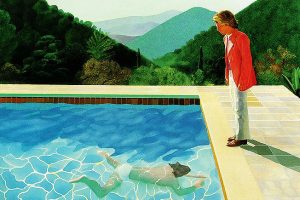 For information Bloomberg, a businessman whose wealth is $ 5.5 billion plans to sell the picture at an auction not less than $ 80 million. Currently, negotiations are underway, which auction will open it for auction-it may be Christie’s, Sotheby’s or Phillip’s.

If there is a buyer who is willing to spend this amount, then David Hockney will become the most expensive artist during his lifetime. Now such a record belongs to the American pop art artist Jeff Koons. In 2013, its inflatable dog «Orange Balloon Dog» was sold at Christi’s for $ 58.4 million. A personal record for the most expensive work belongs to Hockney painting “Pacific Coast Highway and Santa Monica” in 1990, it was sold for $ 28.5 million.

According to analysts, British billionaires are ready to invest in the work of Hockney. Thus, they plan to gradually bring their compatriot to the list of the most expensive artists in the world.