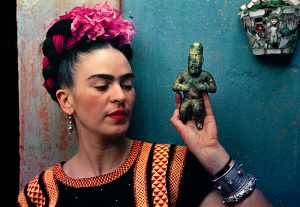 Now it was the turn of the Victoria and Albert Museum (V & A), who dedicated her show of personal belongings to the artist from her museum in Mexico City, opened in 1957 in the so-called Blue House, where she was born and lived most of her life. The museum kept the situation, personal things, at the request of her husband Diego Rivera, packed and hidden in the bathroom. They were discovered half a century later and some of the items were restored in the museum in 2012 after restoration. Now more than 200 exhibits from this collection: dresses with colorful Mexican ornaments, ornaments, photographs, letters and self-portraits – for the first time left Mexico for display in London.

“If this exhibition does not change, it significantly complements our understanding of the personality and creativity of Frida Kahlo, gives an idea of how she worked on her way,” says Claire Wilcox, senior curator of the fashion department at V & A. Here, even the cosmetics that Kalo used, her medical corsets and prostheses, which she had to wear all her life. What did not stop her from being friends with the best artists, photographers and intellectuals of her era, among them Man Ray, Nicholas Murray, Tina Modotti. Frida loved to shoot herself. Her photographs at the exhibition are shown with self-portraits, which, bedridden, she wrote tirelessly. And on one of the necklaces of jadeite Frida restorers found traces of green paint. It was in him that Frida on one of the self-portraits of 1933. According to the curator, “there is a feeling that even beads should have been in her color to match the color of the picture.”

The Victoria and Albert Museum
Frida Kahlo. Creating your own image
Until November 4
www.vam.ac.uk